Despite an impassioned plea during Lyra McKee's funeral in Belfast, Sinn Fein and the DUP still remain at odds. 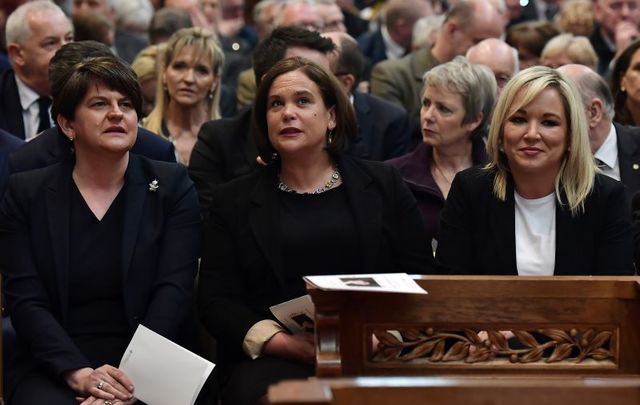 Northern Ireland has been without a government for two years

The leaders of Sinn Fein have rejected DUP leader Arlene Foster’s proposal to end the impasse that has left Northern Ireland without a functioning government for nearly two years.

On Wednesday, political leaders from Dublin, Belfast, and London joined together at St. Anne’s Cathedral in Belfast for the funeral of 29-year-old journalist Lyra McKee who was shot and killed in Derry last week.

During the funeral, the presiding Father Magill asked: “Why in God's name does it take the death of a 29-year-old woman with her whole life in front of her” to bring together the varying politicians.

Father Magill received a standing ovation for his comments:

On Wednesday, following the Belfast funeral, Arlene Foster, head of the Democratic Unionist Party (DUP), said: "For our part, I want to ensure we can get down to business.”

“We all need to come to the table in a spirit of wanting to restore the Assembly and dealing with the issues which matter most to people.”

"It is time to get Government functioning so we can implement key reforms to fix our hospitals and schools. Whilst we have been able to deliver millions of extra resources from Westminster, we could do so much more though through a restored Assembly and Executive.”

"We stand ready to restore our local government immediately and in parallel with a talks process to resolve outstanding issues.”

"A parallel process can ensure that we immediately get back to work at Stormont, but that the issues which have held up the restoration of devolution to receive the focus and respect which they deserve in a time-limited process.”

Sinn Fein deputy leader Michelle O’Neill responded to Foster’s comments on Wednesday, saying: “In terms of what Arlene Foster has proposed today, in terms of going into the Executive and having a parallel process, that will not work.”

Sinn Fin leader Mary Lou McDonald said in a statement also on Wednesday: "Political leaders should be working together.”

“Sinn Féin wants to see the full restoration of the institutions of the Good Friday Agreement.”

“Sinn Féin wants to be in government making decisions on issues which impact on the lives of local people.”

“We have told the British Prime Minister and the Taoiseach that the current situation of stalemate of no Executive or Assembly is untenable and cannot continue.”

“Sinn Féin is ready to play our full part in a serious and meaningful talks process which removes obstacles to power-sharing, delivers rights, and restores the Assembly.”

“The two governments should now meet with urgency through the British Irish Intergovernmental Conference, to provide solutions to the outstanding rights issues, which are at the heart of sustainable power sharing.”

On Thursday, Foster tweeted a call for "parallel all-party talks:"

I respect that Irish is important to those who cherish the language. But schools & hospitals matter to everyone. Stormont should be restored immediately to deal with key reforms. A parallel all-party talks process can deal with those issues SF wish to raise. https://t.co/hc0PhtVe1N

A statement from O’Neill on Thursday read: “The DUP had ten years in an Executive to demonstrate whether they were prepared to treat all citizens equally. They failed to do so.”

“But if they are now saying that they are prepared to deal definitively with the rights issues – including marriage equality, women’s rights, Irish speakers and victims - then we are in a very different scenario.”

“We will enter any process in good faith but, clearly, it must be credible and focused on the issues if it is to be successful.”

“The British Irish Intergovernmental Conference should be urgently convened so that both governments working together begin addressing the need to end the discrimination and denial of rights - rights that are available everywhere else on these islands.”

“In that changed context, Sinn Féin stands ready to re-establish the power-sharing institutions.”