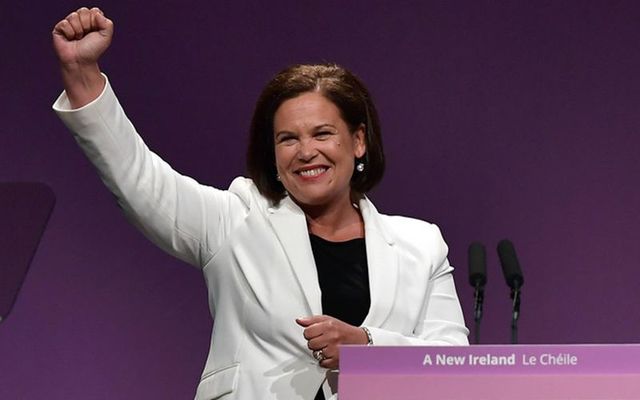 Mary Lou McDonald's arrival as the new leader of Sinn Fein was supposed to mark a change that would distance the party from the violence of the IRA campaign and make it more acceptable to voters in the south and as a partner in a future coalition government here.

A middle class Dublin woman who went to private school and college, she had no connection with IRA atrocities.  She had none of the cordite smelling baggage of her predecessor, Gerry Adams.  So she seemed perfect as the new Sinn Fein president and the new face of the party.

Of course there were lingering doubts, mainly the old ones about who really calls the shots in Sinn Fein.  And the manner of her installation as Adams’ successor last February after an "election" in the party in which she was the only candidate did not lessen these concerns.

But she is a clever, articulate and forceful performer and she faced down such questions immediately after taking over, insisting that no one was going to tell her what to do.  Sinn Fein is a normal democratic party like any other, she insisted, and there would be no one pulling her strings.

She ridiculed the idea of shadowy senior IRA figures in the background controlling her.  Anybody who thought that did not know her, she said, with her customary blend of humor and steel.

It was pretty convincing for many people, and both the media and the general population in the south relaxed a bit and decided to give her a chance.  Maybe it was a new beginning for Sinn Fein after all.  And she was an impressive performer in the Dail as the only real opposition to the government, which also helped her image of strength and independence.

All of which was fine for the past five months.  But then came the extraordinary events of last week which have blown away her credibility and raised once again the specter of the former IRA Army Council hard men in the North dictating Sinn Fein policy and decisions.

It seemed to come out of nowhere. McDonald did an interview with the Press Association (the U.K. press agency) on Monday of last week.  That would not usually be seen as anything important or unusual.  But what she said during the interview was groundbreaking and immediately created headlines.

You will remember that in the Brexit referendum in 2016 a majority of people in Northern Ireland voted to remain in the EU, but this was subsumed in the overall U.K. vote to leave.  With it now looking more likely that Britain will crash out of the EU without a deal, which would cause immense damage to Ireland, McDonald was asked if a poll on Irish unity (a so-called border poll) should be held so that people in the North would have the option of joining with the south and thereby staying in the EU.

Ireland's soft border with Northern Ireland as it appears now.

Her answer was nuanced and thoughtful, but essentially it said that a poll on Irish unity should not be held at this time given all the uncertainty that Brexit will create.  In saying that she appeared to be reversing long-standing Sinn Fein policy which has always been that unification is the goal and it can't come soon enough.  In the immediate aftermath of the Brexit vote two years ago, Sinn Fein had repeated that it wanted a border poll.

McDonald’s repositioning of the Sinn Fein stance on unification lasted less than 24 hours.  At the Dail the next day (Tuesday) she "clarified" her view, saying that she had been misunderstood and that she was in favor of a referendum on unification without undue delay.

So what had happened in less than a day to bring about this swift reversal?  Only one answer to that question made sense.

Overnight she must have got a phone call from the North to bring her back into line. “Hello Mary Lou, it's Belfast calling…”

No other explanation made sense to the other political leaders both north and south. She was back on message, sounding like she was reading from a script.

On Wednesday she doubled down again in another interview in the North making herself crystal clear. “I want a border poll and I want it to happen soon,” she said.

The thoughtful, nuanced approach to the question of a border poll was gone, and in its place was the traditional IRA/Sinn Fein position that reunification of Ireland was the answer to everything and it must be achieved without any delay whatever the consequences.  The trouble with this simplistic mantra is that it is highly dangerous, which is something that McDonald's original interview had echoed.

It's worth recalling exactly what she had said in that interview when asked about a border poll in the context of a hard Brexit. Her answer was that this would be the wrong climate for a substantive debate on such a complex and emotive constitutional issue, and that a border poll should be put to one side until the dangers posed by Brexit are sorted out.

“The obvious thing would be to say, well, have the border poll and remove the border, if the border is the problem simply take it away, and there is a certain logic to that,” she said.  “I am very, very conscious that you can’t come at this issue in that simplistic way.  It’s very important when we come to addressing the issue of partition we do it in the best possible climate and we do it in a way that maximizes consent.

“It is not my preferred option or our preferred option that we deal with the issue of Irish unity in a climate that is unsteady or unstable or chaotic, in other words in the context of a crash Brexit or a very hard Brexit.

“It is my strong preference that we have sequencing that firstly delivers a level of economic and social certainty, in as much we can be certain, and stability, and from that base we then continue the conversation about Irish unity,” she said.

In saying this McDonald was putting herself and Sinn Fein in line with all the other political parties in the south.  It was a mature, considered, nuanced statement that echoed the views of the vast majority of people here. In particular her references to maximizing consent and delivering economic and social certainty before any border poll would happen were precisely what is needed. 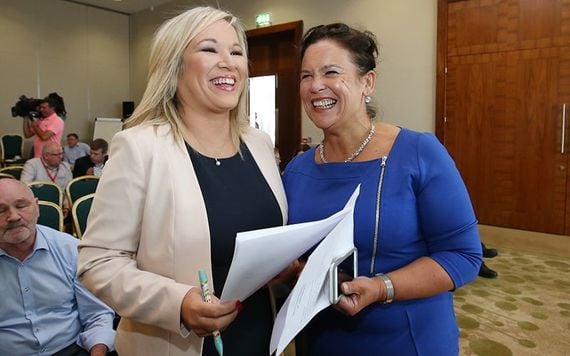 There are a host of political and constitutional questions that unionists of all shades would need answered, like what kind of representation and rights they would have a in a unified Ireland, whether it would be a federal arrangement or something else, how much power a regional parliament in the North might have, how many seats in the Dail, and so on.

Maximizing consent, as McDonald put it, would be essential for unity so that a majority of Unionists would be happy and we would avoid another 30 years of violence, this time in the south.

Her reference to delivering economic and social certainty before any border poll was also wise and realistic.  Unionists would want to know exactly what kind of Ireland they would be joining, about separation of church and state, about educational and health services and many more social issues.

And on the economy, of course, there are major questions that would need detailed answers before unionists (and many nationalists in the North) could vote for unity with any confidence in a border poll.

Very simply, this comes down to who would be paying the bills for the North after reunification.  You will be aware that the North costs the U.K. around £10 billion a year, thanks to its poor economy, high unemployment, huge welfare bill etc.

Instead of the usual glib suggestion that Britain will continue to pick up the tab to get rid of the North, there would need to be guarantees in place and precise information on how many years such support would continue and how quickly it would decline to zero.  Would taxpayers in the south be left to pick up the entire bill within two or three years, if not immediately?

And in that context, maximizing consent (McDonald’s phrase) would be important just as much in the south as in the North.

Whenever people here are asked in opinion polls about unity, the majority is in favor.  But that changes dramatically when they are asked if they would be willing to pay substantially more tax to make it possible.

A referendum on future reunification would have to be held not just in the North but on the island of Ireland as a whole.  And there remains a huge amount of work to be done to get many people here to support it, soured by years of The Troubles and the extreme, anachronistic views of so many in the North (and that applies to both sides up there).   The truth is that many people in the south don't like the North very much, or the people who live there.

The tragedy of all this is that McDonald’s interview offered real hope for the future. Apart from the immediate issue of Brexit and the call for a border poll, she also talked about the desirability of seeing unity in the much wider context of a genuinely different and inclusive Ireland in the future where everything would be up for consideration and reshaping.  That could include a new flag and a new national anthem, she said.

Overall her interview was a grown-up, realistic assessment of what a border poll really means and why it is far too complex to be dumped into the turmoil of a hard Brexit.  It seemed to indicate that Sinn Fein might now be waking up to this reality.

Sadly, within a day this hope had been dashed as the shadowy hard men in the background reeled her back in and she reverted to the usual simplistic slogans.