There was a brief moment in this present Stormont morass that appeared to indicate unionists and republicans in Northern Ireland were ready to begin the long, torturous trek towards compromise. 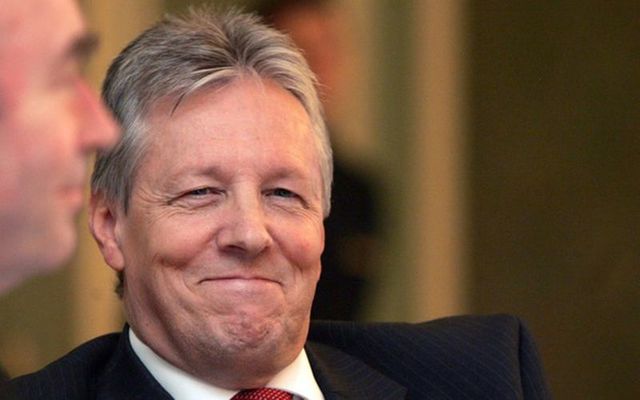 The former leader of the DUP Peter Robinson. RollingNews.ie

There was a brief moment in this present Stormont morass that appeared to indicate unionists and republicans in Northern Ireland were ready to begin the long, torturous trek towards compromise.

Former Leader of the DUP Peter Robinson recently caused a storm when he suggested that unionists ought to prepare for the possibility of a united Ireland in the near future, saying that, while he still rejected Irish unity in principle, he doesn't "expect my own house to burn down but I still insure it because it could happen."

Former @duponline leader Peter Robinson hits back at those who criticised him for suggesting that unionism needs an insurance policy against the possibility of a United Ireland. Is there ever a time when a former party leader should speak out publicly? pic.twitter.com/rIecz04qaJ

What this insurance policy might entail was less clear, but what is clear is that one of the most prominent figures in unionism over the last four decades has publicly accepted that there is a genuine possibility that Irish unity will occur in the short-term future, and that it would be prudent of unionists to prepare for such an outcome. It was certainly a far cry from the ‘No Surrender’ mentality which has defined Ulster unionism for generations.

Read more: It's time for a United Ireland poll, Theresa May

Nationalists, who are fighting desperately to overturn the democratic will of the people in relation to Brexit, cling to the nonsense spouted by Peter Robinson. Would it be ok for unionists to simply ask for 2nd referendum if a first one delivered a majority for a United Ireland?

President of Sinn Féin Mary Lou McDonald responded in kind, stating in an interview on July 30 that it "is not ... our preferred option that we deal with the issue of Irish unity in a climate that is unsteady or unstable or chaotic, in other words in the context of a crash Brexit or a very hard Brexit."

In other words, Sinn Féin would not exploit the present political debacle in London to advance its key political objectives.

This was a hugely significant statement from the senior-most figure within the republican movement. Not only was it a departure from the centuries-old mantra that ‘England’s Difficulty is Ireland’s Opportunity,’ but since the Brexit referendum, Sinn Féin has been steadfast in its claim that a border poll is the obvious and necessary remedy to Brexit and has repeatedly demanded that one must occur within five years' time.

Mary Lou McDonald says 'a chaotic Brexit' is not the time to seek a united Ireland https://t.co/rhZ85qBtFH pic.twitter.com/VVRDYeJq5q

What motivated the Sinn Féin leader's comments? Mary Lou McDonald is the face of the new generation emerging within Sinn Féin. She is a Dublin native, she was originally a Fianna Fáiler, and she has no direct links to the older tradition of militant republicanism typified by the Provisional IRA.

While McDonald’s generation still holds unity as the highest republican ideal, it also seeks to conduct the conversation about the future inside a political environment defined by inclusivity, consent, and acceptance. Perhaps, then, McDonald’s comments were one part of the broader internal campaign to reconstruct Sinn Féin's identity and make it increasingly more palatable to a wider segment of the population.

Read more: 42% of Northern Ireland wish for a United Ireland, according to new poll

This would make sense, given that, since 1998, the party has focused much of its energies and resources on expanding its base beyond the nationalist working classes of Belfast and Derry, which, necessarily, must include a segment of the population that is less passionate about nationalist ideals like Irish unity.

While one should not confuse this to mean that McDonald's comments indicate Sinn Féin no longer seeks Irish unity, it is certainly true that Sinn Féin now advocates a political message that is far more dynamic, and the party itself seeks a broad electoral mandate to pursue policy objectives that have little (if anything) to do with the constitutional question.

Sinn Féin leader Mary Lou McDonald tells @BBCgmu that a hard Brexit would make a border poll inevitable but that it would be a "tense and testing" atmosphere for a debate on a united Ireland. pic.twitter.com/kpl4ePWi92

Within the wider context of Sinn Féin’s overall transformation, it appears that by de-prioritizing the border poll, McDonald was attempting to shift the focus of the Brexit conversation away from the impassioned constitutional question and towards the more mundane arguments about the customs union, the free trade area, and other technical economic arrangements related to the EU.

But whatever her initial motivation, McDonald subsequently backtracked, saying that, "I want a Border poll and I want it to happen soon," a position that was a complete reversal from her previous statement, but one that is much more closely in line with traditional Republican doctrine.

This dramatic reversal reveals that, not only did she face overwhelming backlash within Sinn Féin, but also that the hardline elements within the party still largely control the subject of the debate around which the future of Northern Ireland is discussed.

In many ways, the present political climate has primed Northern Ireland for exactly these types of exchanges. The Good Friday Agreement had the adverse effect of allowing the more radical parties in the country (i.e. Sinn Féin and the DUP) to come off of the margins and insert themselves into the political mainstream. They have done this remarkably well, and both have succeeded in overtaking their rivals within their respective communities and establishing themselves as the dominant political presence.

While this has necessarily moderated both parties' positions, it has also empowered the radical elements within who have endured despite two decades of peace and reconciliation. That is why Mary Lou McDonald cannot suggest that a border poll is not in the country's immediate interest without being forced to reverse her position, and why Peter Robinson cannot suggest that unionists would be wise to prepare for a united Ireland without facing an overwhelming backlash.

Of course, it shouldn't surprise that there still exist large segments of the population in Northern Ireland that refuse to move beyond the constitutional question. But that these elements still largely shape and control the conversation is cause for alarm, especially because Northern Ireland is entering an era of enormous uncertainty which will necessarily see the country's fundamental relationships with both the Republic and Britain reshaped and redefined, regardless of the input of those within Northern Ireland.

If the radical elements are permitted to shape the conversation to meet their vision—and the recent exchanges indicate that they will—we can be reasonably certain that the post-Brexit debates will be imbued with the old orange and green trappings of a supposedly bygone era.

The stage is thus set for the final round of negotiations on Brexit. It is clear that while policymakers in Dublin, London, and Brussels wrestle with each other over the future of the web of economic ties binding the four constituent parts, the conversation in Northern Ireland will revert to the age-old (yet painfully familiar) debate over the country's constitutional future.

Sinn Fein do not see Brexit as a "Trojan horse" for a united Ireland, party president Mary Lou McDonald has said ahead of a meeting with Prime Minister Theresa May https://t.co/fcsvaIkLYT pic.twitter.com/P4jbl7icHV

As always, the hardliners will have a louder voice in this debate than their counterparts because it is the fight they are best-suited to undertake. This article does not suggest that Northern Ireland is on the precipice of a Troubles 2.0 (and, indeed, this author believes that two decades of meaningful progress, the nature of the constitutional arrangements, and the present economic conditions make a return to large-scale violence highly unlikely).

But it does suggest that just as Northern Ireland has become more polarized over the previous two decades (in almost all facets of society), it has yet to move on from the fundamental disagreements that have always defined the relationship between the communities here; Gael and Gall, Catholic and Protestant, nationalist and unionist, Irish and British.

Do you agree? Let us know your own thoughts in the comments section, below.