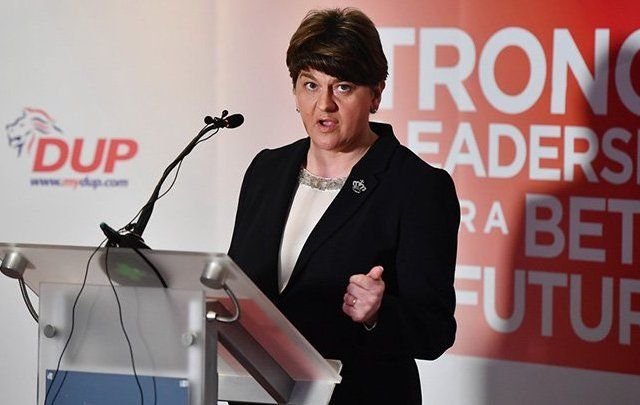 Updated 12.10pm:  Democratic Unionist leader Arlene Foster has said she will strive to achieve the best deal for Northern Ireland as she enters talks with the Tory leader Theresa May, on the formation of a new government at Westminster, in London.

The First Minister of Northern Ireland, Foster, said “The Prime Minister has spoken with me this morning and we will enter discussions with the Conservatives to explore how it may be possible to bring stability to our nation at this time of great challenge.”

Speaking at the House of Commons Foster said the election result was “truly historic”. The DUP recorded its best election result with 10 Members of Parliament being sent to British parliament. With the hung parliament result of the general election the DUP is now in the position of kingmaker in Westminster.

Foster declined to confirm plans for talks with the Tory Party.

"Yesterday also represented a great result for the Union. Not just here in Northern Ireland but right across our United Kingdom," she said.

"Those who want to tear apart the Union that we cherish and benefit from so hugely have been sent a clear and resounding message."

"In the days and weeks ahead, it is that Union that will be to the forefront of our minds. The Union is our "guiding star".

"We may represent Northern Ireland constituencies in the House of Commons but we are as seized of the interests of the Kingdom as a whole as we are for our small province.

"I make no apology for saying that the DUP will always strive for the best deal for Northern Ireland and its people. But equally, we want the best for all of the United Kingdom."

Foster also commented on the uncertainty facing the United Kingdom following the Manchester and London terror attacks and wit the Brexit negotiations on the horizon (they had been set to start on June 19).

Sinn Fein also won seven seats but are not part of plans to form a government. The republican party refuse to take their seats in Westminster.

President of the Sinn Fein party, Gerry Adams, said “Sinn Féin respects the mandate we have received and our electorate who voted in such huge numbers," he said.

"Nationalists and republicans have turned their back on Westminster and accept that the centre of political gravity is now on the island of Ireland.

"The Taoiseach and DUP need to focus on restoring the political institutions.

"Theresa May sought a mandate for Brexit, austerity and the erosion of human rights. She got her comeuppance.

"The Irish government needs to seize the initiative to secure designated special status for the North as part of the Brexit negotiations."

Updated 8.40am:  The DUP will prop up a minority Tory government after an extraordinary British election that left the DUP in the key position of keeping the Tory Party in power.

The consequences for Brexit, for the peace process, for stability in the new British government are still to be worked out but the Irish Times reports that after a late flurry of contacts overnight the DUP have reached agreement.

Ironically one issue the DUP the former party of Ian Paisley will seek to explore is a more open border with the Irish Republic as well as a softer Brexit with extra funding for the North.

In the North itself Sinn Fein and the Democratic Unionist Party (DUP) are the big winners in the Northern Irish election, which sends 18 Members of Parliament (MPs) to Westminster, while the Social Democratic and Labour Party (SDLP) has been decimated as has the Ulster Unionist Party.

With ten seats the DUP is in a powerful position to prop up the Tory Party in power at Westminster because the Tories are short of the 327-seat majority at 219 seats.

The Conservatives started the campaign with a 20-point lead yet ended up barely holding on to a three-point margin. The Tory Party difficulty provides a huge opportunity for the DUP to play kingmakers. Little wonder that the BBC – as a matter of urgency – interviewed DUP spokesmen on the party’s position regarding propping up the Tories.

Even Northern Ireland appears to have developed its own two-party system. #GE2017 pic.twitter.com/xf04awZIDm

Meanwhile, the British Labour Party find themselves in the happy position of asking the question “Where did it all go right.?”

In Northern Ireland, Sinn Fein will end up with seven seats, their best performance in a British parliamentary election, continuing their rapid rise to become the largest nationalist party.

Hume’s old seat in Derry was one of the three Westminster seats that the SDLP lost as former party leader Mark Durkan was defeated by Elisha McCallion of Sinn Fein. McCallion was a first-time candidate who paid an emotional tribute to the late Martin McGuinness in her victory speech.

Two other seats – in South Down and South Belfast – fell leaving the SDLP with no representation at Westminster.

Because Sinn Fein refuses to take their seats at Westminster there will be no Irish nationalist representation in the British parliament for the first time in modern history.

Suggestions that Sinn Fein would end their abstentionist policy and take their seats were quickly shot down by Sinn Fein leader Gerry Adams. The party has always refused to take the oath of loyalty to the queen.

SDLP and UUP are wiped out in night of turmoil in Northern Ireland as DUP and Sinn make gains #GE2017 https://t.co/veq42mQNWU pic.twitter.com/mjMkaQt1cW

The other huge loser was the Ulster Unionist Party, for decades the most powerful party in Northern Ireland. They lost their only seat meaning that the two former powerhouses of Northern politics no longer have any representation in the British parliament.

The power-sharing government has been suspended in Northern Ireland for several months and the new political muddle makes the future even more unclear as does the potential for the DUP to heavily influence British government policy.