After his run as Trump's White House Press Secretary, Spicer, a proud Irish American, is said to be considering TV gigs in Ireland and the UK, where he sees himself as immensely popular. 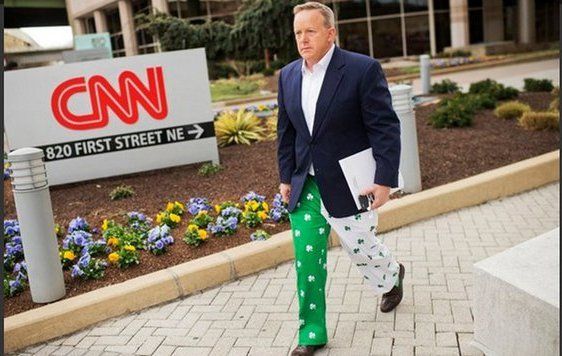 Sean Spicer has always worn his love of Ireland on his sleeve if not his pants. CNN/Twitter

A list of the most popular men in Ireland probably looks something like this: Liam Neeson, Conor McGregor, Sean Spicer.

If your name is Sean Spicer, that is.

During an interview with the political news website Axios on Wednesday, Spicer, Trump's former White House Press Secretary, stated that his widely-viewed press briefings included viewers abroad and had made him one of the most popular figures in Ireland, the land of his ancestors.

“The US press briefing had become part of their nightly viewing,” he said, adding that he was mobbed and asked to take many selfies during a recent trip to Europe.

“It was a prime-time show from Europe to the Middle East… I’m one of the most popular guys in Ireland.”

Sean Spicer in his role in the White House.

In order to cash in on his popularity, Spicer is believed to be considering paid TV appearances and speaking gigs in Ireland and the UK.

One agent who had talked with the former Press Secretary concerning potential speaking confirmed to Axios that the selfie thing was a big part of Spicer's litmus test for his popularity. “He kept talking about how everyone stops him for selfies — that’s one of his go-to lines. It’s true, by the way. It happened when I was talking to him.”

The agent added, “He thought he was a much bigger deal than [other] former press secretaries."

Spicer, who had previously worked as a high-profile Republican political aide, served as Trump's Press Secretary and Communications Director from the time of his inauguration (Spicer's first press briefing on the job took flack for its preoccupation with the inaugural crowd size) until July, when he resigned after the hiring of Wall Street mogul Anthony Scaramucci.

During his White House tenure, he was famously lampooned by fellow Irish American comedian Melissa McCarthy.

In the same Axios interview, Spicer also dropped some hints about a forthcoming book about his experiences working for the Trump administration.

His passion for his Irish heritage first gained attention in 2016, when he appeared on CNN on St. Patrick's Day clad in a pair of green and white pants embroidered with shamrocks.

Headed into the @CNNSitRoom at 5pm on @cnn to help get @wolfblitzer into #StPatricksDay spirit pic.twitter.com/SD4vmoO6wQ