Talk about road rage! McCarthy will be hosting SNL for the sixth time this weekend. 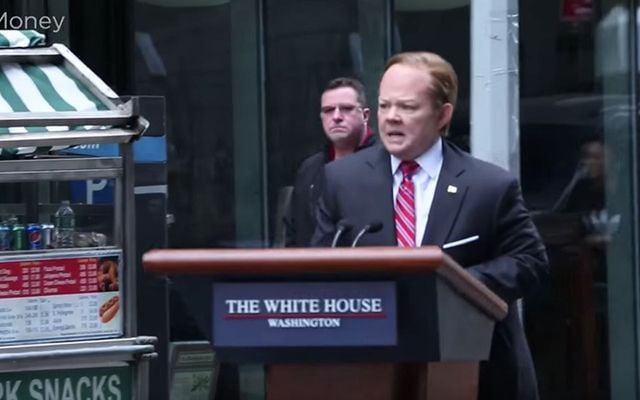 Talk about road rage! McCarthy will be hosting SNL for the sixth time this weekend. YouTube/CNN Money

Okay, it was not actually Spicer, it was Melissa McCarthy taking her now famous impression to the streets, likely to get footage for SNL, which she's hosting (for the sixth time no less) this Saturday.

As would not be the case with any other traffic obstruction in New York, onlookers were quite amused as the Irish American comedian screeched Spicer's signature "Come on!!!"

Read More: SNL's Melissa McCarthy says being Irish is "one of the ways I approach the world"

The evening before, McCarthy posted a clip of her as "Spicey" on the roof of 30 Rock, with a reference to the bushes Spicer was not hiding in but simply among on Tuesday night when reporters tried to ask him about Trump's decision to fire James Comey.

Read More: Trump would be so mad if these women played him and his administration on SNL

In any case, we're doubly looking forward to SNL this week!