President-elect Joe Biden thanked Pope Francis for his blessings and expressed his desire to work together. 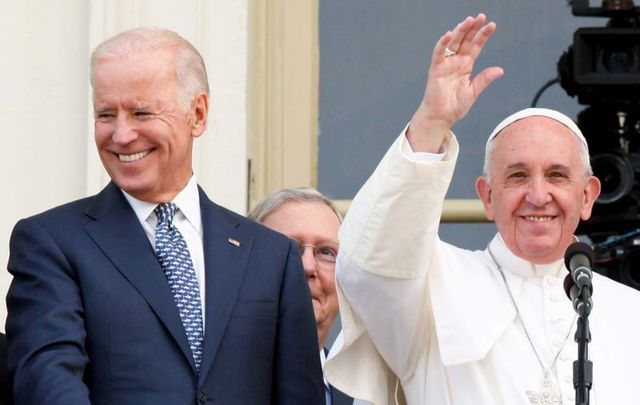 September 24, 2015: Vice President Joe Biden stands beside Pope Francis, who waves to the crowd from the balcony of the US Capitol building, after the first-ever papal address to a joint meeting of the US Congress. Getty Images

President-elect Joe Biden, the first Catholic person to be elected as President of the United States since John F. Kennedy in 1960, had a phone call with Pope Francis today, November 12.

In a statement, the President-elect’s transition team said on Thursday: “President-elect Joe Biden spoke this morning with His Holiness Pope Francis.

“The President-elect thanked His Holiness for extending blessings and congratulations and noted his appreciation for His Holiness’ leadership in promoting peace, reconciliation, and the common bonds of humanity around the world.

“The President-elect expressed his desire to work together on the basis of a shared belief in the dignity and equality of all humankind on issues such as caring for the marginalized and the poor, addressing the crisis of climate change, and welcoming and integrating immigrants and refugees into our communities.”

The same day that President-elect Biden and Pope Francis had their first official phone call, the Pope marked the #WorldDayOfThePoor in a tweet:

Generosity that supports the weak, consoles the afflicted, relieves suffering and restores dignity to those stripped of it, is a condition for a fully human life. #WorldDayOfThePoor

During a 2015 interview with America Media - The Jesuit Review, then-Vice President Biden said Pope Francis is “the embodiment of the Catholic social doctrine that I was raised with, the idea that everyone is entitled to dignity, that the poor should be given special preference, that you have an obligation to reach out and be inclusive."

You can watch the entire 2015 interview here:

On October 29, as voting had begun across the US ahead of the official November 3 election day, then-candidate Joe Biden penned an op-ed for The Christian Post which said in part: "My Catholic faith drilled into me a core truth – that every person on earth is equal in rights and dignity, because we are all beloved children of God."

He added: "We are called, as Christians, to serve rather than be served, and a Biden-Harris administration will embody that foundational value."

My Catholic faith drilled into me a core truth — that every person on earth is equal in rights and dignity. As president, these are the principles that will shape all that I do, and my faith will continue to serve as my anchor, as it has my entire life. https://t.co/DRsQ2cA9m1

During his live address on Saturday, November 7, the day that major networks in the US called the election in his favor, Biden said: "The Bible tells us to everything there is a season, a time to build, a time to reap and a time to sow. And a time to heal. This is the time to heal in America."

Addressing the many Americans who lost a loved one throughout the pandemic, Biden referenced the popular hymn On Eagles Wings, saying "It captures the faith that sustains me, and which I believe sustains America."

Quoting the hymn, Biden said: "And now together on eagles' wings, we embark on the work that God and history have called us to do with full hearts and steady hands, with faith in America and in each other, with love of country, a thirst for justice."

You can watch Joe Biden's full speech from November 7 here: