US networks have called Pennsylvania for Joe Biden, taking the Democratic Candidate past the 270 electoral college votes he needed. 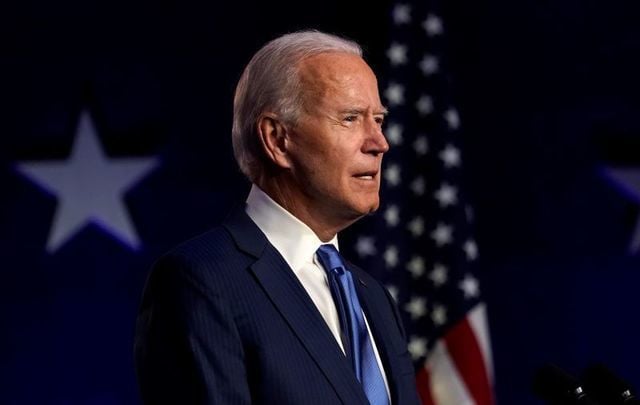 Democratic candidate Joe Biden is set to become the next President of the United States after several American news agencies called the state of Pennsylvania in his favor.

Biden has looked close to clinching the presidency for several days, making up ground in the pivotal state of Pennsylvania to eventually flip the state blue and surpass the 270 electoral votes required to defeat President Donald Trump.

Biden trailed Trump by more than 500,000 votes in Pennsylvania at one stage but dominated the mail-in votes tallied after Tuesday's election to eventually overtake the President and build an unassailable lead with 98% of votes reported.

US networks have since called the state of Nevada for Biden, which carries six electoral votes.

The former Vice President will become the 46th President of the United States and the oldest president ever sworn into office when he is inaugurated next January.

Biden trailed in several key swing states on Tuesday night as in-person tallies strongly favored the incumbent Trump, but he made up ground in the following days thanks to huge support from mail-in ballots and absentee votes.

The Democratic Candidate currently leads the popular vote by more than four million votes and now looks set to win more than 300 electoral votes in an election that once appeared that it would be decided by the narrowest of margins.

Biden, with almost 75 million votes at the time of writing, has won more votes than any other presidential candidate in American history and is in good shape to win the states of Georgia and Arizona with counting almost completed in each state.

His election means that running mate Kamala Harris will become the first-ever female Vice President of the United States.

Biden and Harris's victory comes after one of the most extraordinary elections in American history, with counting taking several days in numerous states due to the high volume of mail-in voting.

Despite taking place in the midst of a global pandemic, the 2020 election saw the highest voter turnout in US election history, breaking the record set in 2012 by more than four million votes.

The election was not the landslide that Democrats would have hoped for in the run-up to Tuesday's vote, but it proved to be far more comfortable than they could have expected on Tuesday evening, when early counts heavily favored the incumbent President.

However, the Trump Campaign is unlikely to concede the election and has indicated that it will contest the results of several key swing states, although it appears that Biden has secured victory, with every major US network with the exception of Fox News calling the election in his favor.