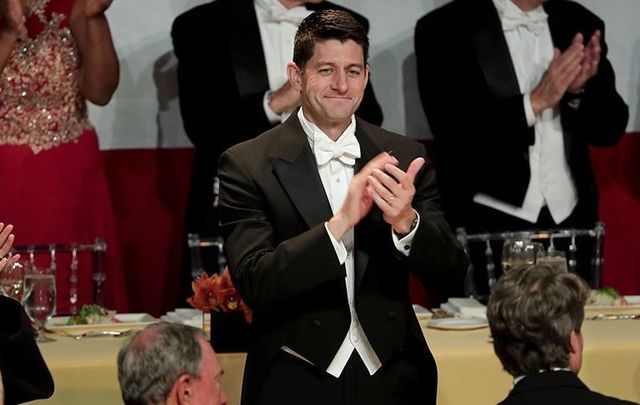 A funny thing happened to House Speaker Paul Ryan on his way to the annual Al Smith Dinner sponsored by the Archdiocese of New York—he wasn’t all that funny.

Rest in peace, Bob Hope, Ryan is no competition.

After winning an Emmy in 1952 for having the Most Outstanding Television Personality, Bishop Fulton J. Sheen said, “I’d like to thank my writers: Matthew, Mark, Luke and John.” Ryan should check them out because they have more of a sense of humor than some of the stale one liners that Ryan came up with.

And what is amazing is that he actually stole one of the jokes directly from John F. Kennedy in 1960. In that tense setting in the final weeks of the election which many thought as a referendum if a Catholic could ever become president, JFK looked around the room and spotted Francis Cardinal Spellman and said, he was ‘‘the only man in America who could bring together amicably at the same banquet table, for the first time in this campaign, two political leaders who are increasingly apprehensive about the November election, who have long eyed each other suspiciously and who have disagreed so strongly both publicly and privately: Vice President Nixon and Governor Rockefeller.’’

Ryan tried the same trick.. “A lot of people they ask me, you know,” said Ryan, “a guy from Wisconsin, what it’s like to work on a daily basis with an abrasive New Yorker with a loud mouth? But you know, once you get to know him—Chuck Schumer’s not all that bad.”

Here are are more of Ryan’s jokes:

- “Every morning, I wake up in my office and scroll Twitter to see which tweets I will have to pretend that I didn’t see later.”

- “I know last year at this dinner Donald Trump offended some people with his comments, which critics said went too far. Some said it was unbecoming of a public figure and that his comments were offensive. ... Well, thank God he’s learned his lesson.”

- “I’m from Wisconsin. It’s a great state to visit in the fall. Looking back, someone should have told Hillary. Speaking of which, I got Hillary’s new book. This sums up today’s politics perfectly. She took eight months, writing 10 hours a day, to explain what happened in 512 pages. The president explained it in a tweet. Hash tag, I won.”

- “Everyone will report what happened here tonight differently. Breitbart will lead with ‘Ryan slams the president amongst liberal elites.’ The New York Times will report ‘Ryan defends the President in a state Hillary won.’ And the president will tweet, ‘300,000 at Al Smith dinner cheer mention of my name.’”

- “Every afternoon, former Speaker John Boehner calls me up. Not to give advice. Just to laugh.”

- “I learned how to handle insults. Steve Bannon said I was born in a petri dish at the Heritage Foundation. This is amazing — no one knew Steve believed in science.”

- “I know why Chuck [Schumer] has been so hard on President Trump. It’s not ideological. Chuck is just mad he lost his top donor.”

What’s not funny are Ryan’s policies. He has consistently tried to slash SNAP (Supplemental Nutrition Assistance Program). You know what SNAP really is? It’s food stamps so the poor can eat. Yeah, what could be easier than to bully than some poor kid looking for a peanut and jelly sandwich?

Ryan and his “me first” attitude—he has had only one job outside the U.S. government in his whole life, driving the Oscar Mayer Weinermobile—should know that Ayn Rand was fully against Social Security and Medicare—yet she hypocritically collected both of them. And that hypocrisy lives in Ryan. How? Just standing next to Cardinal Dolan of New York, a man whose Catholic Charities does so much to alleviate the sufferings of so many of the poor. Perhaps Ryan should heed the words of one of Bishop Sheen’s writers: “Blessed are you who are poor, for yours is the kingdom of God.” –Luke 6:20-21. Ryan should remember that. The poor will see the kingdom of God—not Ryan’s campaign donors.

Whatever Trump says and does is OK with the Congressman from Wisconsin, from grabbing them by the pussy to stripping millions of Americans of their health care. When the history of this dark period in American history is written, Ryan will go down as one of Trump’s principal enforcers.

I guess the joke’s on us.