During Governor Murphy's trade mission to Ireland, Irish company Applegreen announced it will be moving its US headquarters to New Jersey, as well as a $126 million investment in the Garden State. 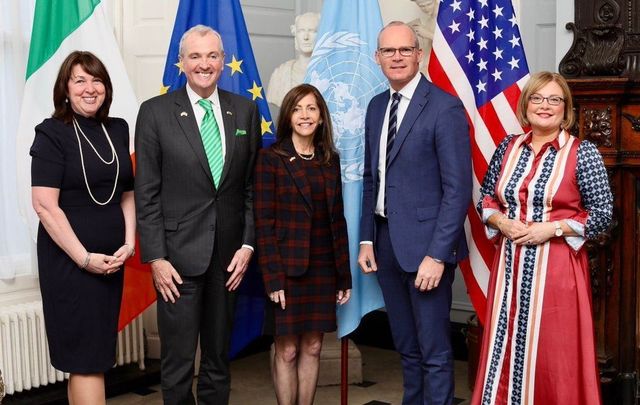 New Jersey Governor Phil Murphy started a four-day trade mission to Dublin and Cork on Sunday, focusing on increasing business, cultural and educational ties between the Garden State and Ireland.

After touring the Book of Kells at Trinity College and the Guinness Storehouse with his wife Tammy on Sunday, the governor had good economic news to announce on Monday with Applegreen, the Irish company which is moving its U.S. headquarters to Glen Rock, New Jersey with a $126 million investment.

In awe of the Trinity College Library and Book of Kells – one of the finest jewels of Irish cultural heritage. #NJIrelandMission pic.twitter.com/VaxXVS72W8

Applegreen, dotted along many Irish roads and highways with its gas and convenience stores, is also a major plaza operator throughout the U.S. with 250 locations in 18 states.

Applegreen will redevelop all of New Jersey’s 21 on-highway service plazas in a move that will create 800 new jobs over the coming years, according to Murphy’s office.

“As a proud Irish American, I am thrilled to be in Dublin and joined by Applegreen, Ireland’s foremost service plaza operator, to announce the relocation of its U.S. travel plaza headquarters to New Jersey,” said Murphy.

“Applegreen is a world-class travel infrastructure partner who will generate significant economic growth for the state and bring innovation and expertise to the redevelopment of New Jersey’s 21 on-highway services plazas. We welcome the hundreds of new jobs that Applegreen will bring to New Jersey and look forward to building a strong partnership that drives our state’s innovation economy forward.”

Proud to announce @goapplegreen has chosen New Jersey for its United States headquarters – bringing 100 good-paying jobs to the Garden State now and 800 over the coming years, which will boost our economy and deepen the New Jersey-Ireland economic relationship. #NJIrelandMission pic.twitter.com/bloBLUK1EB

Both New Jersey and Ireland are chock-full of enterprising and innovative thinkers. With three new Memorandums of Understanding, we now have even more opportunities to change the world for the better. #NJIrelandMission pic.twitter.com/Rd3wm4roZs

Pleasure to welcome you, @GovMurphy, to Government Buildings today.

Good to discuss the ties of family and friendship, and economic opportunities, Ireland shares with New Jersey.

Enjoy the rest of your visit to Dublin and Cork. pic.twitter.com/IiZB4TbFTK

Murphy was due to have a number of meetings in Co Cork with the Chamber of Commerce, University College Cork, and the clean energy company ORSTED.

Just wrapped the third day of our economic mission to Ireland.

We met with government officials, held productive discussions, & met with over 50 companies interested in growing their businesses in NJ.

The partnerships we are forming will undoubtedly grow our innovation economy. pic.twitter.com/ZhEmDgHt9X