Ken Mayers and Tarak Kauff, part of the Veterans for Peace organization, have pleaded not guilty in Dublin to the charges against them from their March 17, 2019 protest at Shannon Airport. 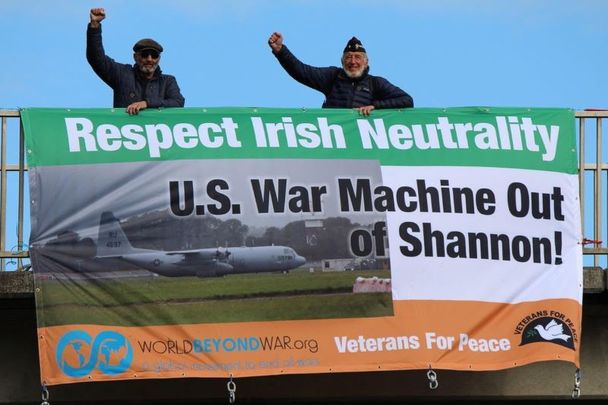 Mayers and Kauff both pleaded not guilty to the three charges against them: criminal damage to a perimeter fence (with a value of €590); trespassing on the curtilage of a building with the intent to commit an offense or unlawfully damage property; and interfering with the operation, safety, or management of an airport namely by entering a runway area and causing it to close.

Posted by Veterans For Peace Ireland on Tuesday, April 26, 2022

The jury heard on Tuesday that both men admit to “making an opening in the fence at Shannon Airport,” as well as entering the airport lands on the day in question.

The duo, part of the Veterans for Peace organization, went onto the Shannon Airport airfield on March 17, 2019, to "inspect any aircraft associated with the US military that was at the airport."

On the day of their protest, there were US military aircraft at Shannon Airport which the duo "believed carried troops and weapons through the airport on their way to illegal wars in the Middle East, in violation of Irish neutrality and international law."

Shannon Airport shut down for about 40 minutes due to the incident and the two men were arrested.

Posted by Veterans For Peace Ireland on Sunday, March 17, 2019

Mayers, from New Mexico, and Kauff, from New York, were detained for 13 days before being released on bail. However, as part of their bail conditions, they had to surrender their passports. The two remained in Ireland for about eight months; it took a high court intervention for them to have their passports returned.

In court on Tuesday, Richard Moloney, a former police fire officer at Shannon Airport, said that he apprehended Mayers and Kauff on the airport taxiway on the day in question.

“They were very courteous. I had no hassle dealing with them,” Moloney said in court.

During questioning from the defense, Moloney agreed that it was obvious that Mayers and Kauff were protestors. They were reportedly donning hi-vis vests that read “Veterans for Peace,” and unfurled a banner that read, “U.S. Veterans say Respect Irish Neutrality/U.S. War Machine out of Shannon Airport.”

“As the man says, this was not my first rodeo dealing with protesters," Moloney said. “These were the nicest and most courteous protesters I ever met in my 19 years in Shannon Airport.”

Similarly, Garda Pat Keating, who was in charge of Shannon garda station in Co Clare on the day of the men’s arrest, told the court that the two men were “the best custodians I’ve had in 25 years."

The trial is set to continue this week.

Mayers, who was a US Marine Corps officer from 1958 to 1978, said on Tuesday: “The most important thing to come out of this trial would be a greater recognition on the part of both Irish elected representatives and the public of the importance of Irish neutrality and the great threat presented by the US manipulation of governments around the world."