Matthew McConaughey delivered remarks at the White House two weeks after the mass shooting in his hometown of Uvalde, calling on both sides to "rise above" in the gun control debate. 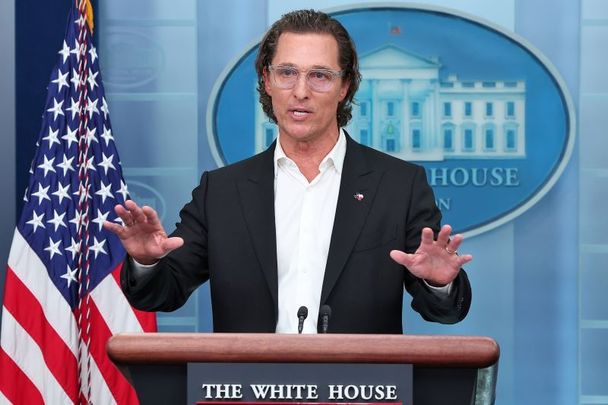 June 7, 2022: After meeting with President Joe Biden, actor Matthew McConaughey talks to reporters during the daily news conference in the Brady Press Briefing Room at the White House in Washington, DC. McConaughey, a native of Uvalde, Texas, expressed his support for new legislation for more gun control in the wake of the elementary school shooting in his hometown that left 19 children and 2 adults dead. Getty Images

Matthew McConaughey delivered an emotional speech at the White House on Tuesday, June 7, two weeks after 21 people, including 19 young children, were killed at Robb Elementary School in his hometown of Uvalde, Texas.

“How can the loss of these lives matter?" Irish American actor McConaughey, who was joined by his wife Camila, said at the opening of his remarks.

McConaughey, a gun owner, said he was in Washington, DC to take meetings with officials on both sides of the aisle, “to remind and inspire them that the American people will continue to drive forward the mission of keeping our children safe, because it’s more than our right to do so, it’s our responsibility to do so.

“I’m here today in the hopes of applying what energy, reason, and passion that I have into trying to turn this moment into a reality. Because as I said, this moment is different. We are in a window of opportunity right now that we have not been in before, a window where it seems like real change — real change can happen.”

McConaughey reflected on his hometown of Uvalde, saying it is where he was "taught to revere the power and the capability of the tool that we call a gun. Uvalde is where I learned responsible gun ownership.”

McConaughey says he and his family, who live in Texas, drove to Uvalde the day after the tragedy that occurred on May 24.

“Even from the inside of our vehicle, you could feel the shock in the town,” he said. “You could feel the pain, the denial, the disillusion, anger, blame, sadness, loss of lives, dreams halted.”

After speaking emotionally about meeting with the families of some of the victims, McConaughey said he met with a cosmetologist who “was well versed in mortuary makeup.

“That’s the task of making the victims appear as peaceful and natural as possible for their open-casket viewings," he said.

“These bodies were very different. They needed much more than makeup to be presentable. They needed extensive restoration.

“Why? Due to the exceptionally large exit wounds of an AR-15 rifle. Most of the bodies [were] so mutilated that only DNA tests or green Converse could identify them. Many children were left not only dead, but hollow.”

McConaughey, who said that counselors are going to be needed in Uvalde “for a long time,” said that everyone he met with in Uvalde told him: “We want secure and safe schools, and we want gun laws that won’t make it so easy for the bad guys to get these damn guns.”

"We need background checks. We need to raise the minimum age to purchase an AR-15 rifle to 21. We need a waiting period for those rifles. We need red-flag laws and consequences for those who abuse them.

"These are reasonable, practical, tactical regulations to our nation, states, communities, schools, and homes.

"Responsible gun owners are fed up with the Second Amendment being abused and hijacked by some deranged individuals.

"These regulations are not a step back; they’re a step forward for a civil society and — and the Second Amendment.

"But people are hurting — families are, parents are. And look, as — as divided as our country is, this gun responsibility issue is one that we agree on more than we don’t. It really is. But this should be a nonpartisan issue. This should not be a partisan issue.

"There is not a Democratic or Republican value in one single act of these shooters. It’s not. But people in power have failed to act.

"So we’re asking you and I’m asking you, will you please ask yourselves: Can both sides rise above? Can both sides see beyond the political problem at hand and admit that we have a life preservation problem on our hands?

"We got to get some real courage and honor our immortal obligations instead of our party affiliations.

"Enough with the counterpunching. Enough of the invalidation of the other side. Let’s come to the common table that represents the American people. Find a mil- — middle ground, the place where most of us Americans live anyway, especially on this issue.

"Because I promise you, America — you and me, who — we are not as divided as we’re being told we are. No."

He continued: "Let’s be knowledgeable and wise and act on what we truly believe."

McConaughey said we can start by "making laws that save innocent lives and don’t infringe on our Second Amendment rights.

"We start right now by voting to pass policies that can keep us from having as many Columbines, Sandy Hooks, Parklands, Las Vegases, Buffaloes, and Uvaldes from here on."

He concluded: "We start by making the loss of these lives matter."