Kathy Hochul, Lieutenant Governor of New York, is next in line should Governor Andrew Cuomo resign or be impeached following his sexual harassment investigation. 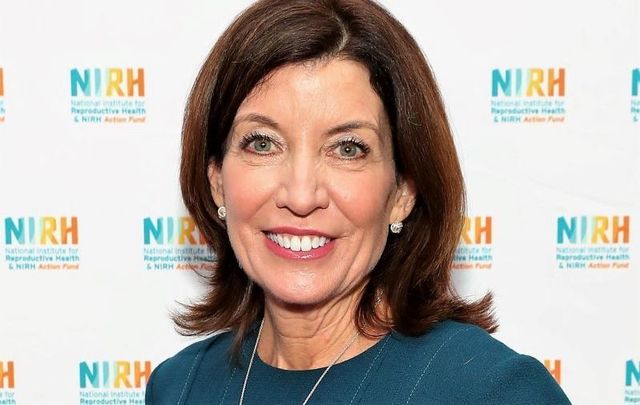 April 30, 2019: Lt. Governor of New York Kathy Hochul poses for a photo during the National Institute for Reproductive Health's Champion of Choice luncheon at The Ziegfeld Ballroom in New York City. Getty Images

Irish American Kathy Hochul is next in line as Governor Andrew Cuomo faces potential impeachment and calls to resign.

In response to the findings of the investigation which were released on August 3, Cuomo said "the facts are much different than what has been portrayed."

"I want you to know directly from me that I never touched anyone inappropriately or made inappropriate sexual advances," Cuomo said in his address the same day the investigation's findings were published.

Despite his denials and apologies, Cuomo is facing the threat of impeachment as well as calls to resign, including from fellow Democrats President Joe Biden, Speaker of the House Nancy Pelosi, and New York Senator Chuck Schumer.

Hochul, the Lieutenant Governor of New York since 2015, has not publicly called upon Cuomo to resign. Instead, she said that “no one is above the law” and that, as next in line for the Governor’s seat, “it would not be appropriate to comment further on the process at this moment.”

No one is above the law. Under the New York Constitution, the Assembly will now determine the next steps.

Because Lieutenant Governors stand next in the line of succession, it would not be appropriate to comment further on the process at this moment. 2/2

Should she replace Cuomo, Hochul would make history becoming the first female governor of the state of New York.

She would also be the first Irish American governor of the state since Hugh Carey, who, along with Senator Edward Kennedy, Senator Daniel Patrick Moynihan, and Speaker Tip O'Neill - the so-called Four Horsemen - led efforts to end violence and promote peace in Northern Ireland.

Hochul’s grandparents both emigrated from Co Kerry to the US and met in Chicago. The two married and ultimately settled in Buffalo, New York, where they raised their family. They also help start the Buffalo Irish Center, which remains a bastion of Irish and Irish American culture in upstate New York today.

One of six children born to John P. "Jack" Courtney and Pat Courtney in Buffalo, Kathleen 'Kathy' Mary Hochul (née Courtney) frequently points to her Irish roots in the scope of her political career.

This past St. Patrick's Day, Hochul, who has previously visited Ireland, said in a video: "Just over 100 years ago, my father's parents fled a life that was surely destined for poverty in Co Kerry."

She added: "I will say like all good Irishmen and Irishwomen, I love a good fight, especially if it's for the people of my beloved state.

Over 100 years ago, my father’s parents fled County Kerry in Ireland to a brighter future in the U.S. Little did they know, their granddaughter would become the highest-ranking Irish-American elected official in NYS. The Irish-American spirit perseveres today. Wishing everyone a safe & happy #StPatricksDay