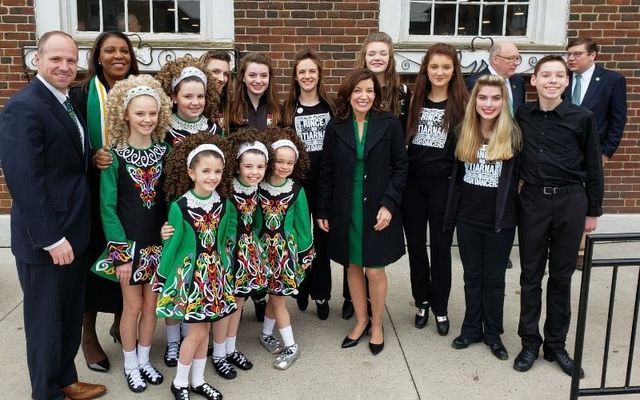 Cuomo is battling for political survival as a range of allegations about sexual misconduct continues to dog him.

Meanwhile, Hochul, a former congresswoman, is poised to grab the limelight if Cuomo goes and she takes over.

New York has never had a female governor and Hochul is also very proud of her Irish roots which trace to Dingle County Kerry. She grew up in an Irish neighborhood in South Buffalo and her grandparents helped start the Buffalo Irish Center.

She spoke at the Easter 1916 centenary commemoration in New York in 2016 stating:

“100 years ago, a crowd of courageous men and women, in fact not much larger than the crowd we see here today, issued a call for freedom, independence, and justice,” she said.  “And as Americans, whose country was born in a remarkably similar fashion, we fought the identical struggle 140 years prior. So we shared an unbreakable bond between our two nations.”

As the highest ranked Irish-American in state government, always proud to go back to my roots and the neighborhood where my immigrant grandparents helped launch the @BfloIrishCenter ☘️

Almost half century of the annual luncheon – a must stop for politicians! pic.twitter.com/c4aq5SNW9J

In an interview in 2019 with the Irish Echo newspaper she stated:

“My grandparents helped start the first Buffalo Irish Center. They used to host guests and play Gaelic football. My dad and grandfather played on the team. They were so good, my father used to play on the national team here,” Hochul said, “He really took advantage of the experiences and had a chance to really talk about our Irish heritage a lot.”

“That was a really formative part of who I am – that pride and that heritage. But also knowing it’s a responsibility for a lot of people left behind. Those of us whose families came to America were given a very special gift and opportunity.!

Her Irish heritage played a role in inspiring her to go into public service and government.

She opposed driver's licenses for undocumented but later changed her position when she ran statewide.