Republican Senator John McCain has passed away aged 81 after a battle with brain cancer. Tributes from leaders across the globe have poured in for the life-long US public servant and Vietnam hero. 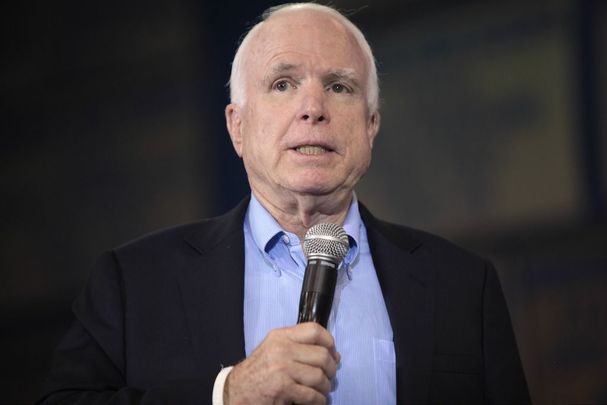 Republican Senator John McCain has passed away aged 81 after a battle with brain cancer. Tributes from leaders across the globe have poured in for the life-long US public servant and Vietnam hero.

The Arizona Senator was diagnosed with an aggressive brain tumor in July 2017. On Friday his family announced that he would not be continuing treatment for the cancer. A statement, released by his office on Saturday, announced that McCain passed away in Arizona, surrounded by his family.

McCain will lie in state in Phoenix, Arizona, and in Washington DC before a funeral at the Washington National Cathedral and his burial in Annapolis, Maryland.

My heart is broken. I am so lucky to have lived the adventure of loving this incredible man for 38 years. He passed the way he lived, on his own terms, surrounded by the people he loved, in the the place he loved best.

Just some of the tributes flowing out for McCain included:

Our statement on the passing of Senator John McCain: pic.twitter.com/3GBjNYxoj5

.@SenJohnMcCain lived a life of service to his country, from his heroism in the Navy to 35 years in Congress. He was a tough politician, a trusted colleague, and there will simply never be another like him. My thoughts and prayers are with Cindy and his entire family.

"Some lives are so vivid, it is difficult to imagine them ended. Some voices are so vibrant, it is hard to think of them stilled. John McCain was a man of deep conviction and a patriot of the highest order.” [...] Full statement by President George W. Bush https://t.co/FQVYWIUyGL pic.twitter.com/W8LCxJXRLi

President Donald Trump, who famously mocked McCain for being captured during the Vietnam war, tweeted:

My deepest sympathies and respect go out to the family of Senator John McCain. Our hearts and prayers are with you!

According to sources McCain did not want the President to attend his funeral. It is believed that the White House will be represented by Vice President Mike Pence.

From Ireland and abroad:

On behalf of the people of Ireland, I extend my deepest sympathies on the death of Senator John McCain, a wise and remarkable statesman, US ally of Ireland and a proud Scots Irishman who was a champion for immigration reform in the US Senate.

President Michael D Higgins has released the following statement about the death of John McCain. pic.twitter.com/CrofbZbrae

Senator John McCain was an American patriot and hero whose sacrifices for his country, and lifetime of public service, were an inspiration to millions. Canadians join Americans tonight in celebrating his life and mourning his passing.

I am deeply saddened by the passing of John McCain, a great American patriot and a great supporter of Israel. I will always treasure the constant friendship he showed to the people of Israel and to me personally...

McCain was a bona fide hero and a proud Scots Irishman who loved his roots. He was the first Republican to show an interest in the Irish Lobby for Immigration Reform at presidential campaign level appearing at an Irish presidential forum in 2008, in Scranton.

He was also a war hero – the wounds that he suffered during the Vietnam War, having being captured and then tortured in the notorious Hanoi Hilton were beyond savagery and cruelty – it was downright sadistic. He refused to discuss it. He came through it like a hero and has been one ever since.

Last year the Senator told 60 Minutes the five years he spent as a prisoner of enemy combatants seemed like as an eternity that can never be reclaimed. McCain, however, McCain also seemed grateful for his time in prison.

Through his 81 years he knew the humiliation of capture, personal love and loss, riches, fame and condemnation in his nine decades and, in his view, that was a pretty good hand to be dealt.

McCain followed in his father and grandfather’s footsteps become entering the United States Navy. They had both been Admirals.

McCain graduated from the United States Naval Academy in 1958. He trained as a naval aviator and flew attack aircrafts from carriers.

In 1967 McCain narrowly escaped death during the Vietnam War Forrestal fire. In October of that years, on his 23rd bombing mission, McCain was shot down over Hanoi and badly injured.

He was then placed in a prisoner of war camp. In 1968, the next year, he was offered an early release, by the North Vietnamese, as it would mean leaving his fellow prisoners behind. He was release in 1973 after the Paris Peace Accords.

When he returned from the Vietnam War he studied at the National War College. He retired from the Navy in 1981 as a captain. He then moved to Arizona where he started his political career.

Thank you for you service John McCain.

Read more: Ex-CIA chief John Brennan an outlaw like his Irish namesake "Brennan on the Moor"