The 2020 Democratic nominee's Irish ancestors emigrated from Ireland in the 1800s, and Biden has never shied away from his Irish roots. 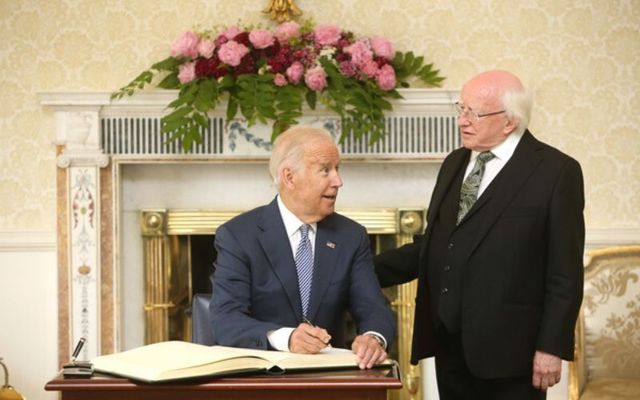 Shortly before going to Ireland as U.S. vice president in 2016, Joe Biden penned a letter for Ancestry.com revealing how much the trip meant to him.

The Democratic nominee's Irish ancestors emigrated from Ireland in the 1800s, and Biden has never shied away from his Irish roots.

Biden, who is thought to be five-eights Irish, said ahead of the official six-day visit that being Irish has "shaped his entire life."

The former vice president met with then-Taoiseach Enda Kenny, who presented Biden with a hurley and sliotar (hurling ball). Biden said that he wished hurling was played more in the United States and humorously labeled it a  "dangerous game."

He also traced his family's ancestry on his 2016 visit and visited places in Louth, Mayo, and Meath, where his ancestors emigrated from.

Biden penned the Ancestry.com letter the day before he left for Ireland in 2016 and said that Ireland was part of his soul.

He said that he was honored to be returning to Ireland and wanted to celebrate "everything that Ireland had become."

Biden traveled to Ireland as the country was celebrating the centenary of the Easter Rising, and he nodded to how the seismic event put Ireland on a path to independence in his open letter. He also visited Kilmainham Gaol - where the leaders of the rising were executed - during his 2016 visit.

You can read Biden's open letter in full below.

"I’m going back to Ireland – the country from which my ancestors hailed, and a country whose independence the Easter Rising set in motion, 100 years ago this year. It is my first dedicated trip to this nation as Vice President – during which I’ll meet with the country’s leaders, discuss issues of trade, economic recovery, migration and refugee policy, and other national security challenges, and celebrate our shared heritage. Our shared values of tolerance. Diversity. Inclusiveness.

"Over the course of my life, I’ve been to a lot of places. I’ve traveled all around the world – more than a million miles on Air Force Two alone. I’ve been honored to have held a lot of titles. But I have always been and will always be the son of Kitty Finnegan. The grandson of Geraldine Finnegan from St. Paul’s Parish in Scranton; a proud descendant of the Finnegans of Ireland’s County Louth. The great-grandson of a man named Edward Francis Blewitt, whose roots stem from Ballina, a small town in Ireland’s County Mayo – sister city to my hometown in Scranton, Pennsylvania. An engineer with a poet’s heart. Months after my mother passed away, I found an old box of his poems in my attic.

"And that is America: This notion that home is where your character is etched. As Americans, we all hail from many homes. Somewhere along the line, someone in our lineage arrived on our shores, filled with hope. We are blessed to experience that simultaneous pride in where we’ve found ourselves, while never forgetting our roots.

"James Joyce wrote, 'When I die, Dublin will be written on my heart.'

"You can see what I see right here and across social media.

"I’m looking forward to sharing it with you."