The outgoing Vice President was visibly moved as President Obama revealed a surprise honor for the former Delaware senator. 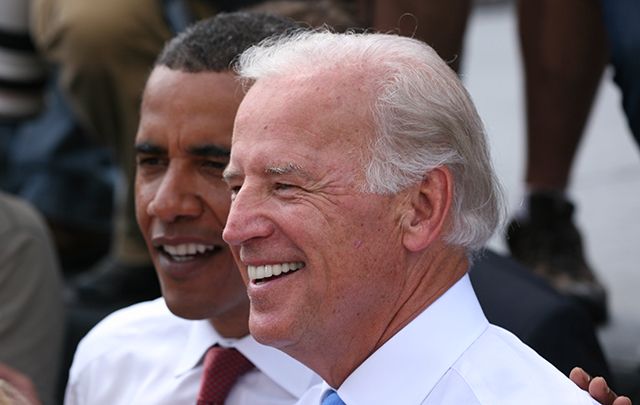 US President Barack Obama made use of his last few weeks in office to award the highest civilian honor in the U.S., the Presidential Medal of Freedom with Distinction, to his outgoing Vice President, Joe Biden.

"For your faith in your fellow Americans, for your love of country, and for your lifetime of service that will endure through the generations … I am proud to award the Presidential Medal of Freedom with Distinction to my brother, Joseph Robinette Biden Jr,” Obama announced on Thursday, to the surprise of an emotional Biden, visibly taken aback by the honor.

Already wiping away tears as Obama thanked him for working alongside him during his presidency, Biden, who has Irish roots in Louth and Mayo, was delivered with the unexpected news that he was to join just three others--Pope John Paul II, Ronald Reagan and General Colin Powell--who have previously received the Presidential Medal of Freedom with Distinction.

Applauding the former Delaware Senator as "the best vice president America's ever had" and a "lion of American history," Obama continued to say, "To know Joe Biden is to know love without pretense, service without self-regard, and to live life fully."

After receiving the honor, Biden took to the podium, praising the current President as a "remarkable man who did remarkable things for this country".

"This honor is not only well beyond what I deserve, but it's a reflection of the generosity of your spirit," Biden told Obama.

"I don't deserve this. But I know it came from the president's heart," he continued, confirming that he had no “inkling” of what was to come, arriving at the gathering believing they were to toast senior staff with the first lady and his wife Dr. Jill Biden.

Within their speeches, both Obama and Biden spoke with fondness of not only the close working relationship between themselves but the friendship between their families, with Obama stating, "this is the kind of family [the Bidens] that built this country. That's why my family is honored to call ourselves honorary Bidens,” before quoting Yeats and joking that he had to use the words of an Irish poet and Biden was due to quote Heaney.

Quoting a Republican senator during his colorful and lengthy remarks on the Vice President, Obama continued, "If you can't admire Joe Biden as a person you've got a problem. He's as good a man as God ever created."

Biden, who was inducted into the Irish America Hall of Fame in 2014, often speaks of his proud Irish roots, traced back to counties Mayo and Louth. He visited Ireland for the first time in a personal capacity in late June 2016 to visit his family’s homeplace and to learn more about their history and the history of Ireland around the time of their emigration.

The Vice President received a warm welcome throughout his six-day visit, during which he enjoyed a round of golf with Irish Taoiseach Enda Kenny, delivered a keynote address in Dublin Castle, and traveled to Áras an Uachtaráin to meet with Irish President Michael D. Higgins.

Growing up in Scranton, Pennsylvania, Biden is believed to be five-eighths Irish, with an especially strong connection on his mother’s side of the family.

While his mother’s entire family tree traces back to Ireland with ancestors named Arthurs, Blewitt, Boyle, Roche, Scanlon and Stanton accompanying her Finnegan kin, just one-eighth comes from Biden’s father’s side, which contributed the Hanafee name.