Why has the Irish War of Independence been forgotten by Irish America?

Ireland's centenary of its declaration of independence from England has been largely ignored by worldwide media outlets. 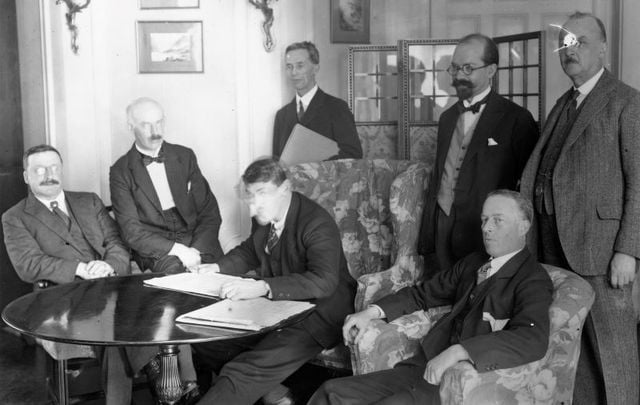 Irish American John Rossi is a retired professor from La Salle University where he taught Irish and English history for 56 years. Below, he argues that Irish America, as well as the rest of the world, has forgotten Ireland's War of Independence.

How many Americans, including the 33 million of Irish descent, know that Ireland celebrated the centenary of its Declaration of its Independence from England this past January?

The launching of the Anglo-Irish War (1919-21) passed in the United States without notice from the American media, save for what remains of the Irish-American press.

No major celebrations, no reaction from our leading political figures from the President on down, including such Irish American stalwarts as Joe Biden or Paul Ryan.

The Irish War of Independence has never resonated with the Irish American community, unlike the Easter Rebellion. The fiftieth anniversary of the Easter Rising in 1966, for example, saw leading American politicians sending greetings to the Irish President Eamon de Valera. CBS even had one of its leading commentators, Charles Kuralt, do an entire show and record album about the event.

For the Uprising's centenary, numerous articles and essays poured off the press and PBS featured a long celebration of the event.

For the Irish War of Independence: nothing.  Nothing on the web, nothing in the major papers or televisions networks.

And yet Ireland’s war against England was significant and in fact, more influential than the Easter Rising, which was crushed in a week and inspired no imitation in the rest of the world.  The Anglo-Irish War was the first successful colonial revolt since the Americans won their freedom from England almost a century and a half earlier.

The global impact of the Irish struggle

Also the Irish, after a bloody civil war, produced a viable democratic system of government. Since the founding of the Irish Parliament, the Dáil, the Irish Republic, with all its flaws, has been a practicing democracy, something rare after most independence wars. The political landscape is littered with colonial revolts that ended in dictatorships as was the case in most of Africa, the Middle East, and the Far East with the exception of India.

The Anglo-Irish War set the standard for many of the future independence movements. For example, Jewish fighters used many of the military tactics honed by the Irish—guerrilla hit and run raids, political and military assassinations, boycotting businesses and individuals—in their war to drive the British out of Palestine. The Algerians also copied the Irish tactics in their revolt against the French in the late 1950s but with a greater resort to terror and a huge loss of life.

Why has this remarkable page in Irish history been forgotten among Irish Americans, unlike the Easter Rising?  The Rising was a noble failure suffused with tragedy, especially the execution of 16 of its leaders including the heroic Patrick Pearse, and the badly wounded James Connolly, who was shot while tied to a chair.

Read More: Today in 1922 the Irish Free State was born

The Rising also produced great literature, highlighted by W.B. Yeats’ unforgettable poem, ‘Easter 1916,’ with its evocative refrain of “A Terrible beauty is born.”

The Irish War of Independence produced few heroic moments and only one charismatic figure, Michael Collins.  De Valera, the other major figure of the war, was cut from a different mold—that of the classic survivor.

Confusing the Anglo-Irish War and the Irish Civil War

In the eyes of Irish Americans, the War of Independence has been confused with the terrible Civil War that followed; a conflict between the extreme Republicans, the IRA, and a moderate faction of Irish nationalists which was willing to settle for something less than pure Republic.  Scars from that clash have still not fully healed in Ireland.

The Anglo-Irish War, against an enemy that all Irish could agree on, produced a relatively low loss of life at an estimated 1500 killed despite some ugly incidents.

The Civil War produced atrocities on both sides, including the execution of 77 IRA men by Irish governmental forces and a total of over 4000 deaths. The ugliness of the Civil War and the divisions that remained in Irish society over the conflict threw a pall over the nation, unlike the Anglo-Irish War, where Irish of all parties were united in their hatred of a common foe.

In America over time, even among Irish Americans, the 1916 Easter Rising and the War of Independence became blurred. The Irish past was either romanticized, through films like "The Quiet Man'" or “The Last Hurrah” or found embarrassing, like the Irish reputation for brawling and hard drinking—think the ‘Paddy Wagon’ and all that conjures up.

The Irish as they gentrified wanted to forget or play down their reputation as having ‘the weakness,’ something I was reminded many times: all the ‘Johns’ in my family were alcoholics.

It is also a sad fact that few Irish Americans know much Irish history. For forty years, I taught English and Irish history in alternate years.  I was amazed that my students, mostly Irish American, knew more English history and had little interest in Ireland’s long and painful past. Often their knowledge was limited to vague ideas of something called the ‘Potato Famine,’ and tales of St. Patrick driving the snakes out of Ireland and his day being a great time to drink green beer.

The Irish War of Independence deserves better than that from the Irish American community. It was a hard conflict against a strong foe but it launched a nation on the road to freedom.

Do you agree that the Irish War of Independence isn't being remembered properly around the world? Let us know in the comments