Irish back Boston Mayor Marty Walsh ahead of first poll

A number of influential Irish American leaders have voiced support for Mayor Marty Walsh of Boston ahead of Tuesday’s nonpartisan preliminary election in the city. 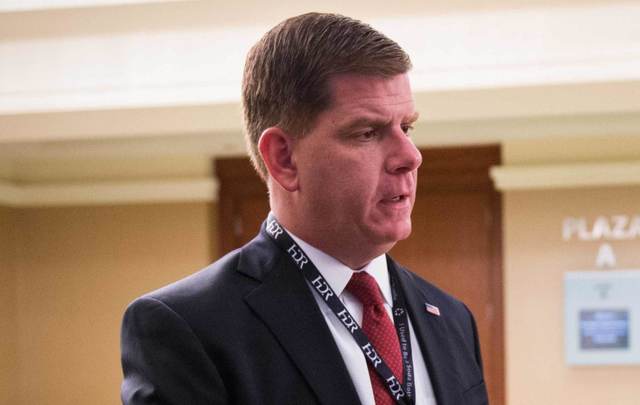 A number of influential Irish American leaders have voiced support for Mayor Marty Walsh of Boston ahead of Tuesday’s nonpartisan preliminary election in the city.

Among the signatories to a notice of support which first appeared in the current issue of the Irish Echo is Brian E. McCabe, Chair of the American Irish Historical Society in New York; Mary Sugrue, chief executive of the Irish American Partnership in Boston; and Santa Barbara, California film-maker Kevin McKiernan.

The coast-to-coast expression of support for an eastern big city mayor reflects not just Walsh’s popularity among Irish Americans, but also his growing national stature after he championed Boston as a sanctuary city for immigrants.

The son of Co. Galway immigrants, Walsh has pioneered a series of bridge-building initiatives with Ireland though he has only made two visits “home” during his four-year mayoral term.

Notably, he signed a sister city deal with Belfast and founded the now annual Friendship Four college ice hockey tournament which is played in Belfast over Thanksgiving.

The incumbent’s closest challenger, a fellow Democrat, and Councilman, Tito Jackson, is a full 31 percent behind Walsh in the latest poll.

The Emerson College Polling Society released the results of a survey last week that displayed Walsh as the current candidate favored to win the mayoral election.

Walsh leads in every demographic (aside from the millennial vote) including Jackson’s own home district, said Gregory Payne, chair of Emerson College’s Department of Communication Studies.

“Of course, one never knows what’s going to happen between now and then, if there’s some type of unforeseen crisis, the mayor might not be responding as the voters would think,” Payne said.

“So, it looks like he’s in the driver’s seat at this moment, but I would just caution that a lot can happen between now and election day.”

Photo of Ben Bradlee, Jr. and Boston Mayor Marty Walsh, at the party to celebrate the release of "The Kid: The Immortal Life of Ted Williams" held at Fenway Park on Dec. 3, 2013. Image: WikiCommons.

The two candidates at the top of the four candidate poll in Tuesday’s primary – almost certainly Jackson and Walsh – will face-off on November 7 in the full mayoral election.

Walsh says he’s seeking a renewed mandate because he “has a lot more work to do.”

Among other signatories to the notice commending the Boston mayor is Mike Breen of Mary’s Gift Irish-medium schools charity in New Jersey; singer Larry Kirwan; author of “Looking for Jimmy” Peter Quinn; and actress Geraldine Hughes.

Should Mayor Marty Walsh be re-elected? Let us know your thoughts on his first term in the comment's section below.