Organizers of Boston Free Speech rally deny any connection with white supremacy groups and claim the city revoked their permit. 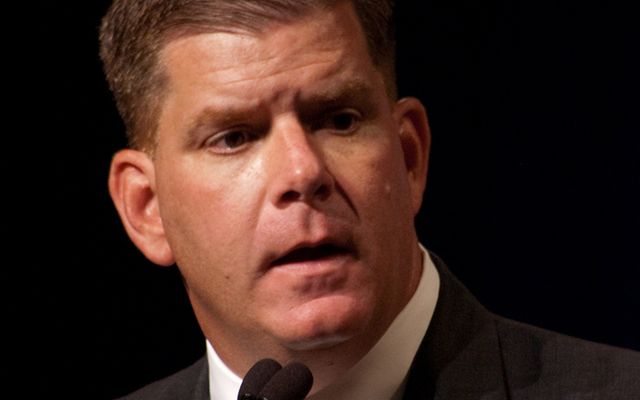 Boston Mayor Marty Walsh pulled no punches when speaking about a Free Speech Rally to take place in the city for this weekend. David Parsons/WikiCommons

The future of a Free Speech Rally in Boston is on the ropes as city officials, including Irish American Mayor Marty Walsh, speak out against hate

A “Free Speech Rally” is planned for Saturday, although permits have yet to be issued by City Hall. The group claims that they submitted an application on July 13 and it was city approved but now seem unsure as to whether they have a permit or not.

The group, Boston Free Speech, denies any connection to white supremacy and is not the same as the one that organized the Charlottesville demonstration that led to the death of a woman and 19 others being treated for injuries.

“We are not in any way associated with the organizers of the Charlottesville rally,” the group wrote on their Facebook page.

“This was a lie and blatant attempt at defamation by [former press secretary to Hillary Clinton] Brian Fallon on twitter [sic]. There have been threats made against our lives already and we will be contacting Boston PD.”

Nevertheless, Walsh is not pulling his punches.

“We don’t need this type of hate,” he insisted.

Speaking prior to the President’s more robust comments on Monday, Walsh said he’d rather Trump hadn’t been so “open-ended” in his remarks but welcomed Attorney General Jeff Sessions’ decision to open a civil rights investigation into the rally.

“Let’s hope they’re consistent. I think it would be great for the President to come out today with a clearer statement, particularly about the white supremacist neo-Nazi groups,” Walsh stated.

“I think he needs to separate himself a little bit from them because I think there are a lot of people putting the two together.”

A number of groups are in the process of organizing counter demonstrations while rumors ran amok yesterday that the rally had been canceled. Boston Free Speech has acknowledged that several of their speakers have backed out but are determined to go ahead this weekend.