Taoiseach Micheál Martin says an "apology should be forthcoming" after Russian state TV aired a simulation showing Ireland being wiped out by a Russian nuclear weapon. 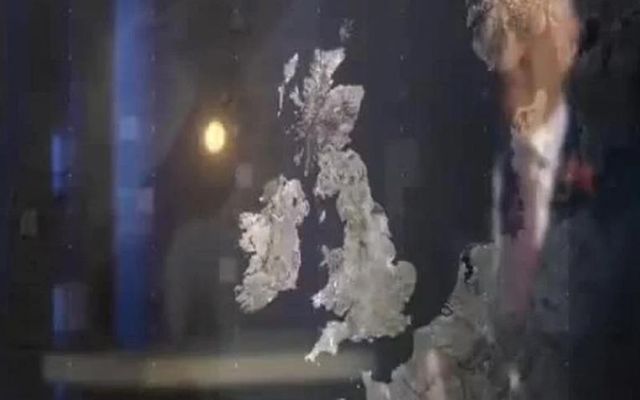 Ireland is seen being wiped out by a nuclear weapon in a simulation that aired on Russian state TV. Twitter

Leading Irish politicians have responded to the shocking simulation aired on Russian state TV over the weekend that showed Ireland being obliterated by a nuclear weapon.

“It is very sinister intimidatory type tactics by the Russian Federation but I don’t think anyone is going to be intimidated by it," Taoiseach Micheál Martin told reporters on Tuesday when asked about the Russian state TV simulation that aired over the weekend.

“I think it reflects a mindset that is worrying and not in touch with reality. I think there should be an apology forthcoming in relation to that.

“But the more fundamental point, I think, is that Russia should cease their hostilities in Ukraine.

“The degree of bombardment and destruction of towns and cities and human carnage that has taken place is absolutely without justification.

“It is an immoral war that should end and humanitarian corridors should be provided consistently, particularly for those trapped in Mariupol and in other locations.”

Over the weekend, clips of a Russian state TV news broadcast began to circulate on Twitter with English subtitles. The broadcast featured simulations of weaponry targeted at the UK that obliterates Ireland.

"The island is so small that just one Sarmat missile is sufficient to sink it once and for all," host Dmitry Kiselyov chillingly says in the clip, "Everything's been calculated already."

This time, with the help of a terrifying cartoon, he claims that "one Sarmat missile is enough to sink the British Isles" (with subs) pic.twitter.com/NqbQfkm6rX

The simulation shows the Russian "unmanned underwater vehicle Poseidon" striking off the coast of Co Donegal in the northwest of Ireland, ultimately wiping out Ireland and the UK.

More talk on Russian state television of destroying the "British Isles" with nuclear weapons. Ireland would be collateral damage pic.twitter.com/gUemmoYUsU

Speaking with Newstalk on Tuesday, Eamon Ryan, Ireland's Minister for Environment, Climate and Communications and Minister for Transport, slammed the Russian simulation as "shocking."

He said: "It's replicated right across Europe where people are looking on thinking, what will happen next?

"There's a lot of concerns that on May the 9, which is victory day celebrating the end of World War II in eastern Europe, that that could be a point to mobilization or a further stepping up of the warmongering.

"I think that's a risk to us, that's a risk to every other European country, and beyond, because what's happening in this war is putting up food prices and energy prices, that also hits the poorest countries in the world.

"It isn't just bombs that kill people, it will be famine and the escalation in energy prices have an immediate effect on people."

When asked if the Russian Ambassador to Ireland should be sanctioned because of the simulation, Ryan said: "One of the arguments is whether we should have or not retain our embassy in Moscow. I've always said it is better to retain it.

"I believe it was state television that that clip was used on? It is totally unacceptable and I'm quite sure our diplomats in Moscow and our Department of Foreign Affairs here will be making it known."

“Let’s not allow ourselves be distracted from the real atrocities being committed by Russian Forces in #Ukraine by disinformation like this,” Coveney tweeted.

There’s been a lot of understandable comment in relation to this trash video on Russian State TV.
Let’s not allow ourselves be distracted from the real atrocities being committed by Russian Forces in #Ukraine by disinformation like this. #StandWithUkrainepic.twitter.com/gM3mgkNF6M