"You are taking us all for fools, aren’t you?" reporter Sarah McInerney told Russian Ambassador to Ireland Yury Filatov during an interview on April 26. 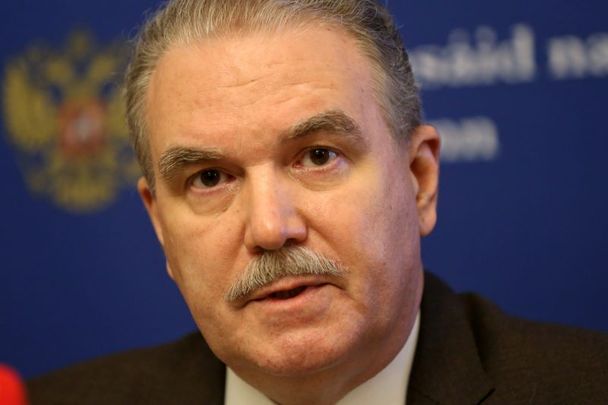 Russia's Ambassador to Ireland made a number of claims that were challenged by reporter Sarah McInerney on Thursday evening's episode of RTÉ's Drivetime.

Filatov went on to claim that Russia has put a "special emphasis on not targeting any civilian infrastructure" while in Ukraine.

Filatov said it was a "calculated staged provocation we witnessed in Bucha. The Russian military had nothing to do with the killing of civilians."

McInerney retorted: "There are realms of eyewitness reports, there's satellite imagery, there's independent journalist reports, all of which point to the atrocities in Bucha being committed by the Russian army."

She continued: “Russia is claiming, if I understand you correctly, that the Ukrainians did this to themselves?"

"Yes," Filatov replied. "We have every reason to believe that the Ukrainian special services and national battalions have been very much involved in staging all that."

McInerney went on to press Filatov about the bombing of a maternity hospital in Mariupol, saying: "This is an attack that was independently verified by AP journalists who were there on the ground, who took harrowing photographs of a pregnant woman on a stretcher that the whole world saw.

"Those same journalists followed up on that woman in the hospital to find out that she and her unborn child had died.

“Is Russia’s contention that she didn’t exist? That the journalists were lying? That everyone was there was lying?”

AP images of a pregnant woman being rushed to an ambulance after Russia bombed a maternity hospital in Mariupol where she was meant to give birth shocked the world. @AP has learned that the woman and her baby have died.https://t.co/yZPZwgbLz8

Filatov replied: “The lady in question did really exist and afterward she gave birth and we know that."

Filatov said that the photo was "staged" and featured a "Ukrainian model" with makeup on to appear bloody.

McInerney then apologized for interrupting Filatov but said: “It’s very difficult and insulting to our listeners to hear what you are saying.

"I think I have to put that to you, because you are taking us all for fools, aren’t you?

“Your contention seems to be that Russia invaded Ukraine and after that point, Ukrainians, in response, started randomly killing each other, raping each other, their own citizens, in an effort to frame Russia for those crimes.

“The whole country was in on it, all the eyewitnesses that have spoken to journalists were in on it, north south east and west, independently came together as part of this big life to frame Russia, and journalists on the ground from America, from France, from the UK, from all over the world, they watched it, they saw this big lie, and they reported the big lie?

"The whole world is in on this big lie, is what Russia is saying.”

At the close of the interview, McInerney asked Filatov if he is aware of the anger Irish people have about Russia's actions and if he's aware of how unwelcome he is in Ireland by many people.

“I know that many, many people are angry and I understand their feelings," Filatov said. "Nobody would be happy with the images and news stories they receive on a daily basis.

“I understand them and I pity them because it’s only - they’re the objects of propaganda warfare. Let’s put it bluntly and straightforwardly."

Filatov claims he and his team have "received quite a number of messages" from Irish people who "try to think outside of the box" and question the things that are happening.

After the interview concluded, McInerney said: “Mr. Filatov made a series of claims in that interview about Mariupol, Kramatorsk, and elsewhere which have been investigated and dismissed by multiple independent analysts.”

You can listen to the entire RTÉ Drivetime interview here.