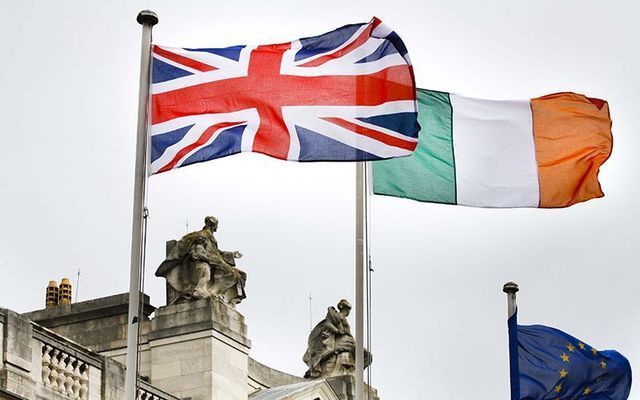 The Union Jack, the Irish tricolor and the EU flag flying above Stromont, in Northern Ireland. Rollingnews.ie

Former Northern Ireland first minister David Trimble has warned that the Irish government’s stance on the Brexit Border could lead to violence in the North. However, the government has denied its Brexit strategy could provoke loyalist paramilitaries.

Trimble, whose support was instrumental in creating the Good Friday Agreement, said any special deal to keep the region within Europe would destroy a key tenet of the agreement which states there would be no constitutional change without majority consent in Northern Ireland.

“What is happening now is that people are talking up the issue of Brexit and the Border for the benefit of a different agenda from the agreement,” said Trimble, in an interview marking the 20th anniversary of the Good Friday agreement. “The one thing that would provoke loyalist paramilitaries is the present Irish Government saying silly things about the Border and the constitutional issue.

“If it looks as though the constitutional arrangements of the agreement, based on the principle of consent, are going to be superseded by so-called special EU status, that is going to weaken the union and undermine the very agreement that Dublin says it wants to uphold,” he said.

Trimble, a Tory peer in the UK House of Lords and an advocate of Britain’s withdrawal from the EU, added: “I believe that some senior Irish government officials go around Brussels talking about the ‘Hong Kong model’ – the one country, two systems idea. That is a precedent they talk about where sovereignty has been transferred from Britain to China. Anything that looks remotely like this or is building on that foundation would be extremely dangerous. Although I think that under this Conservative government I cannot see that prevailing.”

Fianna Fáil leader Micheál Martin described the former Ulster Unionist leader’s comments as “a stark illustration of the uncertainty and instability that has been injected into the Northern Ireland political bloodstream by Brexit.”

Martin said Trimble’s comments displayed a rationale that is an “unwelcome side effect of the effort on behalf of some to aggressively link Brexit” with efforts to unite Ireland.

Tánaiste Simon Coveney also rejected Trimble’s comments. A spokesman for Coveney said Dublin was fighting in the Brexit talks to preserve the “hard-won peace on the island of Ireland.”

Coveney's spokesman said the EU27 “reached agreement with the British government last December guaranteeing avoidance of a hard border and maintaining full alignment North-South in the absence of a deal.”