Sinn Fein and opposition parties to decide on no confidence vote as questions over forgotten whistleblower email remain. 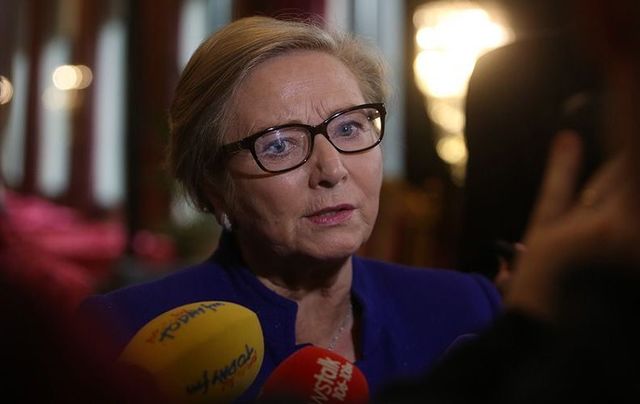 Ireland’s Tánaiste (Deputy Prime Minister) Frances Fitzgerald will face further questions in the Dáil (Irish parliament) on Thursday over her handling of the garda (police) whistleblower controversy that occurred while she was Minister for Justice. The issue could lead to her resignation or trigger an election.

The opposition parties continue to weigh up their next move. Sinn Féin has stated they would decide on Thursday if they will table a motion of No Confidence in Fitzgerald. They have offered her a last chance to provide details regarding what she knew of the campaign to discredit whistleblower Sergeant Maurice McCabe.

Fianna Fáil politicians would not rule out backing the Sinn Féin No Confidence proposal, stating that they would find it “very difficult” to support Fitzgerald.

Read more: The bravest man in Ireland battles on against police and government corruption

The controversy centers on an email sent to Fitzgerald in May 2015. The email set out the strategy that was about to be pursued against whistleblower Sgt McCabe at the O’Higgins Commission.

Fitzgerald will face questions about her awareness of efforts by former garda commissioner Nóirín O’Sullivan to query the “motivation” and character of Sgt McCabe at a commission of inquiry examining claims of police malpractice.

Former garda commissioner Noirin O'Sullivan and the then Minister for Justice Frances Fitzgerald.

The email shows that Fitzgerald had been informed of the gardaí’s legal team’s intention to raise a “serious criminal” complaint against Sgt McCabe, even though no such offense had been committed.

In the Dáil the opposition described the strategy as malicious and said Fitzgerald should have acted on it when she received the mail. Fitzgerald has said she does not remember reading this email and said it made clear that she couldn’t have legally intervened. Speaking to the Seanad (the Senate) on Wednesday evening she confirmed that her legal standing had been reaffirmed by the Attorney General.

The email was discovered by the Department of Justice two weeks ago during a search for an answer to a Dáil question posed by Labour Party politician Alan Kelly. It was a full week before Fitzgerald was alerted to the email. She stated she had forgotten its content.

On Wednesday evening a Fianna Fail politician told the Irish Times it would be difficult for the party to abstain from a vote of No Confidence “considering how the Dáil has been continuously misled.”

Others told the newspaper they anticipate Fitzgerald’s departure by the end of this week.

A frontbench politician said, “There is a sense that Fianna Fáil cannot keep criticizing without taking action. This has happened previously on a similar subject and there is no appetite to back down this time.”

Last week the Fianna Fáil leader Micheál Martin asked for space to address the issue. It was thought that this meant he would raise the matter directly with the Taoiseach (Prime Minister) Leo Varadkar, the leader of the Fine Gael Party. The leaders held a private meeting on Wednesday.

Fitzgerald is also facing criticism for failing to notify Varadkar of the contents of the email when the issue was raised last Thursday. It is said that Varadkar has distanced himself from Fitzgerald privately as the scandal has engulfed her.

Previously, Varadkar criticized incomplete information received from the Department of Justice. He has now ordered a future trawl of documentation and called for an update on the implementation of the Toland Report on the operations of the department.

Should Fitzgerald consider her position rather or is a general election on the cards? Let us know your views below.