Taoiseach Leo Varadkar and only eight Cabinet members are set to go abroad for St. Patrick's Day as the Irish government scales back the annual event. 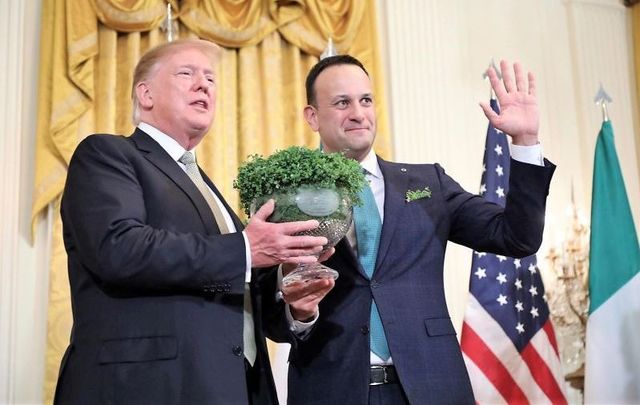 St. Patrick’s Day travel has been scaled back for Irish politicians as no new government has been formed yet

The Irish government confirmed on Tuesday which cabinet members would be going where for the upcoming St. Patrick’s Day events.

According to RTE, there is a “ban” on cabinet members booking first-class flights, hotel suites, or hired limousines during their time abroad.

The visits have been scaled back as no new government has yet been formed after Ireland’s General Election 2020 in February. The 33rd Dáil Éireann is scheduled to have its second sitting tomorrow, March 5. Its first sitting failed to choose the next Taoiseach.

A spokesperson for Tánaiste Simon Coveney told The Irish Times: “The Tánaiste told the Cabinet that the list was modest and balanced and should proceed given the unique opportunity to promote Ireland to political, business and cultural audiences.”

Locations were chosen based on “indisputable and immediate value to our [Irish] interests,” and “destinations that have a significant Diaspora community.”

Cabinet members are reportedly being provided with handbooks that contain “key messages” the Irish government wants to be emphasized abroad. Among them are Ireland’s dedication to the EU, its path forward to securing a trade deal with the UK after Brexit, and the restoration of Stormont as a “political turning point” in Northern Ireland.

Overall, delegates are “to promote Ireland’s economy and global visibility.”

Here are the Irish cabinet members traveling abroad and where they’re going for St. Patrick’s Day:

Taoiseach Leo Varadkar will be traveling to Washington, DC where he will present the traditional bowl of shamrocks to US President Donald Trump on Thursday, March 12. The Journal reports that Varadkar will travel to New York City on March 10 before heading to DC on March 11 where he is expected to attend the black-tie Ireland Funds Gala.

Tánaiste Simon Coveney will be traveling to New York City.

Minister for Business, Enterprise and Innovation Heather Humphreys will travel to Sacramento, California.

Minister of State for Defence Paul Kehoe to Savannah, Georgia.

Minister for Finance, Public Expenditure and Reform Paschal Donohoe will be in Paris, France, and Brussels, Belgium.

Minister for Justice Charlie Flanagan will be in Berlin, Germany.

Minister for Culture, Heritage and the Gaeltacht Josepha Madigan will be in London.

It will be an honour to represent Ireland in London for this year’s St Patrick’s Day events, especially as we seek a close future trading relationship with the UK post-Brexit @dfatirl @DeptAHG @LDNIrishCentre @FineGael @MayorofLondon https://t.co/p2gDZ6SaTL

Minister for Education Joe McHugh was set to travel to Canada but decided to stay in Ireland to deal with coronavirus.

Minister for Health Simon Harris will remain in Ireland.