Second case of coronavirus confirmed in Republic of Ireland

Taoiseach Leo Varadkar says there are no plans to cancel St. Patrick's Day events yet in light of coronavirus. HSE is present at Irish airports as some Dublin employers switch to modified work arrangements. 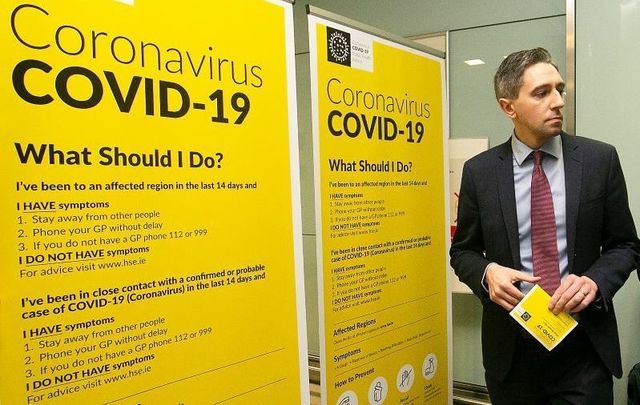 Minister for Health Simon Harris speaking with the media and the Environmental Health Service HSE team at Dublin Airport activating the public awareness campaign for COVID-19 (Coronavirus) on February 28. RollingNews.ie

Taoiseach Leo Varadkar says there are no plans to cancel St. Patrick's Day events yet in light of coronavirus. HSE is present at Irish airports as some Dublin employers switch to modified work arrangements.

Update 4pm EST: Ireland's Department of Health has reported its second confirmed case of coronavirus, Covid-19. During a press briefing on Tuesday evening, Chief Medical Officer Dr. Tony Holohan confirmed that the second patient is a female who recently traveled from northern Italy:

The below was published earlier on March 3:

Ireland’s Minister for Health Simon Harris said in an update on Tuesday that there is “no need for panic” regarding coronavirus in Ireland.

Harris was speaking alongside Taoiseach Leo Varadkar following a cabinet meeting. As of March 3, there is still only one confirmed case of coronavirus in Ireland, though more than 300 people have been tested.

Minister for Health Simon Harris says there is no room for complacency on #coronavirus, but neither should people panic pic.twitter.com/17lF2bb4gE

Harris said that National Public Health Emergency Team (NPHET) was set to meet later in the day. The Team will be analyzing the latest data from the European Center for Disease Prevention and Control, which on Monday raised the likelihood of coronavirus outbreaks in European countries from low-to-moderate to moderate-to-high.

The NPHET will also be finalizing advice regarding large events that are scheduled for Ireland.

“There is no room for complacency in relation to this,” Harris added, “This is a fast-evolving situation, nor should people panic.”

Harris cited recent figures from China, where the disease originated in late December, which revealed some 81 percent of cases were “mild.” The Minister for Health is set to travel to Brussels on Friday to meet with WHO and European health ministers.

Read More: Coronavirus fact box - what you need to know

Also during the press briefing, Taoiseach Leo Varadkar addressed the possibility of Ireland’s St. Patrick’s Day festivities being canceled: “We’re not advising anyone to cancel any gatherings at this stage.

“But bear in mind that the St Patrick’s Day festival and events are two weeks away and a lot can happen between now and then.

“But as of now we’re not advising anyone to cancel major events or major gatherings such as that. But that could change and there will be new advice published later today or tomorrow on major gatherings and there’ll be further meeting of the Cabinet sub-committee meeting on Monday.”

Taoiseach Leo Varadkar says "as of now we're not advising anyone to cancel major events or major gatherings [such as St Patrick's Day events], but that could change, and there will be new advice published later today or tomorrow on major gatherings". #coronavirus pic.twitter.com/O7m6LDM2XQ

Traveling to Ireland and coronavirus

As of March 3, there were more than 92,300 confirmed cases of coronavirus worldwide. Only one of those cases is in the Republic of Ireland, and another one in Northern Ireland. As of Tuesday, more than 300 people had been tested for coronavirus in Ireland.

Ireland’s airports have issued information about coronavirus, but are not conducting screenings on travelers. Last week, Minister Harris said doing so would not be “proportionate” given the current situation and that the World Health Organization (WHO) had not yet advised doing so.

Ireland's HSE is maintaining a presence at Dublin Airport, where hand sanitizing stations have been put up:

The advice from all health experts is that proper hand washing with soap & water provides protection against #covid19. Washing with an alcohol-based hand sanitiser is also effective. We have sanitisers in a range of locations & are following all health advice from @hpscireland. pic.twitter.com/elvwuWe69x

Shannon Airport in Co Clare and Ireland West Airport in Co Mayo said in separate statements that they are heeding advice from the HSE, which also has staff present at those airports. Aer Lingus said in a statement that it is fully cooperating with Ireland’s HSE.

On Monday, the Dublin-based airline Ryanair announced that it had canceled about a quarter of its short-haul flights to and from Italy, which is currently the worst-hit European country in terms of confirmed coronavirus cases.

Last week, the Irish government and the Irish Rugby Football Union (IRFU) confirmed that the March 7 scheduled Six Nations rugby match at Dublin's Aviva Stadium had been called off following the Italian outbreak.

A student at a Dublin secondary school was confirmed as Ireland’s first case of coronavirus over the weekend. While the student is receiving medical care and being monitored by health officials, the school the student attends in Glasnevin has been shut down for two weeks in an effort to maintain containment.

Reports emerged on Monday evening that a music group that the infected student practiced with recently was urged by the HSE in a letter to self-isolate.

In relation to my RTÉ News report this morning, that a HSE letter was advising a musical band to self-isolate, until March 15, Minister Simon Harris has confirmed that the letter is true & that the precautionary measures have been put in place.

Only people who were present at the music practice in question are being urged to self-isolate. RTE reported: "Generally, you need to be 15 minutes or more in the vicinity of an infected person, within 1-2 metres, to be considered at-risk or a close contact."

In a letter issued on March 3, the Irish Congress of Trade Unions insisted that employees who are self-isolating should remain getting paid.

"It is our view that in circumstances where an employee contracts this virus the normal condition for sick leave applies.

"In cases of enforced absences i.e., where there is direction and/or medical advice for an employee to self-isolate, then normal pay should continue to be paid.  This should also apply where an employee self-isolates in accordance with the up-to-date guidance of the HSE.

"In relation to Public Servants, particularly those engaged in delivering Emergency & Health Services, precise arrangements will be as agreed through the normal Collective Bargaining procedures with the employer.

"Where caring duties arise as a direct result of the COVID-19 Virus, and Public Heath advice, such absences should be regarded as ‘enforced absences’ as described above and should be remunerated accordingly.  Other possible flexible working arrangements including ‘working from home’ should be the subject of discussion at local level."

Ireland's Workplace Relations Commission says that in light of coronavirus, "employers and their employees should engage proactively and work to be as flexible as possible to resolve any issues arising at the level of employment."

Read More: Ireland does not plan to screen for coronavirus at airports, for now

According to Adrian Weckler, the technology editor for the Irish & Sunday Independent, employees at Google's Dublin offices have been asked to work remotely on Tuesday and Wednesday as the tech-giant awaits test results for an employee who had "flu-like symptoms:"

The situation: as long as Google doesn't receive any updated status on the Google employee who reported the flu-like symptoms, it appears its work-at-home status will continue.

Have you been impacted by coronavirus? Let us know in the comments