Ireland does not plan to screen for coronavirus at airports, for now

Ireland's Minister for Health said on Wednesday that coronavirus screenings at the country's ports are not "proportionate" given the current situation. The WHO reiterated that coronavirus is not yet at pandemic levels. 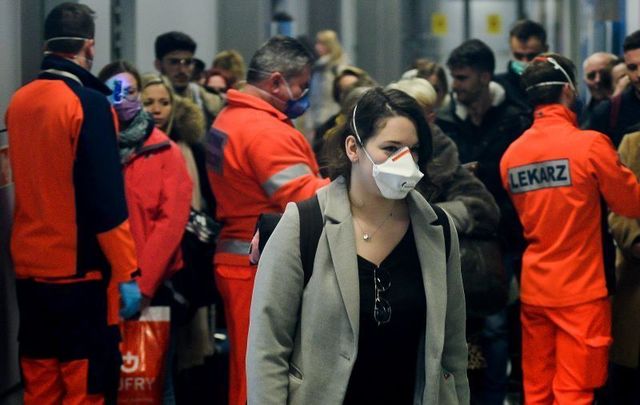 Passengers at Krakow International Airport in Poland are screened for coronavirus on February 26. Getty Images

Ireland's Minister for Health Simon Harris said on Wednesday that Ireland will not be screening for coronavirus at its points of entry as it's not a "proportionate" response to the current situation.

Read More: Irish among those on lockdown in Italy during deadly coronavirus outbreak

Minister Harris made the comments on Today FM's radio program shortly before it was officially announced that the upcoming Six Nations rugby match between Ireland and Italy scheduled for March 7 at Dublin's Aviva Stadium has been called off.

Italy has become the worst-hit country in Europe with confirmed cases of coronavirus. As of Wednesday afternoon, the country reported more than 400 confirmed cases.

For the first time since the outbreak began in late December, more cases have been reported outside of China than inside.

So far, 90 people in Ireland have been tested for coronavirus, but all results have come back negative.

During his call with Today FM on Wednesday, Minister Harris discussed the events that ultimately led to the cancellation of the major sporting event, which was scheduled for just 10 days before St. Patrick's Day.

“I think the rationale is pretty clear," Minister Harris said, "it doesn’t seem like a great idea to be encouraging people to travel to Ireland from an infected part of the world, which northern Italy now is.

“The very, very clear view from public health experts - and I can’t take advice on this from anybody else - was that it shouldn’t proceed. The idea of putting 50,000 people in a stadium with people from an affected region would not be a good idea.”

He added: “There is a public health difference to people deciding to travel versus people all being in a stadium in a confined space for a period of time.

“It would be sending out a very poor message in terms of trying to contain a virus that Ireland would actively be promoting people to come here.

Regarding talks of banning travel, the minister said: “We can’t ban travel, that wouldn’t be a proportionate thing to do. Let’s just pretend we decided in Ireland we wouldn’t accept flights from Italy. That wouldn’t work, Italian people could be flying to France and from France on to Ireland.

“We live in the European Union, there is free movement, and that’s a proportionate thing to do, but mass events are different.”

Minister Harris did note that a travel advisory has been put in place by Ireland's Department of Foreign Affairs advising against unnecessary travel to the affected regions in Italy, as well as Japan, Singapore, South Korea, and Spain.

While Minister Harris declined to say that coronavirus would “inevitably” arrive in Ireland, he did acknowledge that it was “probable.”

Regarding St. Patrick’s Day, Minister Harris said that he and his department are "monitoring all mass events.”

"Nobody can predict how this virus is going to evolve in the next number of days. So what we’ve done is, we’ve set up a specific group in the Department of Health to liaise with the organizers of all public events.

“Quite frankly we don’t know where this virus is going to be in terms of prevalence in our own country or other European countries in the coming days, so it’s something we’re going to have to be watching on a daily and hourly basis.”

When asked if Ireland would begin coronavirus screening at its ports and airports, Minister Harris said: “no is the short answer.”

“Screenings don’t work because you can have this condition for up to fourteen days and not show symptoms, so we do need to have a proportionate response.”

WHO has not declared coronavirus a pandemic

Also on February 26, Dr. Tedros Adhanom Ghebreyesus, the director-general of the World Health Organization, offered remarks at the mission briefing on COVID-19 in Geneva.

“We should not be too eager to declare a pandemic without a careful and clear-minded analysis of the facts,” Dr. Ghebreyesus said. “WHO has already declared a public health emergency of international concern – our highest level of alarm.”

He noted that that WHO will not hesitate to declare a pandemic should the facts present themselves that way.

“At the same time,” he added, “all countries, whether they have cases or not, must prepare for a potential pandemic. Every country needs to be ready to detect cases early, to isolate patients, trace contacts, provide quality clinical care, prevent hospital outbreaks, and prevent community transmission.”

In the US, as the former director of the Center for Disease Control said that a coronavirus pandemic is "inevitable," President Trump tweeted that media sources are trying to make "Caronavirus" look as bad as possible. He later followed up that he will be hosting a press conference with the CDC that evening:

I will be having a News Conference at the White House, on this subject, today at 6:00 P.M. CDC representatives, and others, will be there. Thank you!