The Ancient Order of Hibernians released a statement to the US President after his statements in London declaring “No Good Friday Agreement fulfillment, then no (phenomenal U.K. trade) deal” 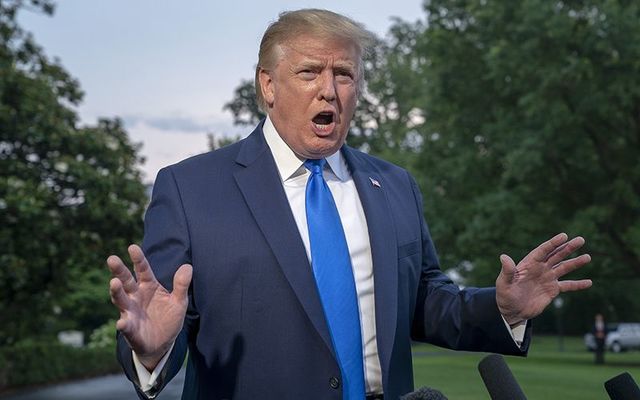 US President Donald Trump: The AOH has a message for the POTUS after his comments on UK trade. Getty

The Ancient Order of Hibernians released a statement to the US President after his statements in London declaring “No Good Friday Agreement fulfillment, then no (phenomenal U.K. trade) deal”

In his remarks from London on Tuesday, United States President Donald Trump stated that “the United States is committed to a phenomenal trade deal between the US and the UK.” American’s largest and oldest fraternal organization the Ancient Order of the Hibernians released a public statement directed towards the president following his speech reminding him of his duties to Northern Ireland’s peace process.

“Respectfully… reminds the President of the existing U.S. commitment as a guarantor of the 1998 Good Friday Agreement and asks that its fulfillment and the delivery of lasting peace in Ireland must be a precondition to any future US/UK trade deal.

Twenty-one years on from that groundbreaking achievement of United States diplomacy, the government of the United Kingdom still has not delivered on many of its Good Friday agreement responsibilities.  This lack of timely fulfillment to an existing deal should give pause before entering into a new agreement, “phenomenal” or otherwise.

In the age of Brexit, we are seeing retrograde as opposed to forward progress in the cause of peace in Northern Ireland.  An increasingly likely “hard Brexit” would repartition Ireland behind a “hard border” and destroying twenty years of bridge building between communities.  The dependency of Ms. May’s government on ten bought and paid for votes from the Democratic Unionist Party (DUP), the only major party not to sign the Good Friday Agreement, makes a mockery of Britain’s Good Friday Agreement commitment to govern with “rigorous impartiality.” The current government's dependence on the DUP has prevented Britain from pursuing “special status” for Northern Ireland which would honor the electoral mandate of the Northern Irish community to remain in the E.U., preclude the necessity for a border, and deliver the British desire for Brexit without the need of a “backstop.”

The devolved Stormont government of Northern Ireland has been in collapse over two years while under the administration of a Northern Ireland Secretary who has repeatedly demonstrated her ineptness for the position.   After two decades, Britain’s commitments under the Good Friday Agreement to a Bill of Rights for Northern Ireland, just resolution of the legacy of the Troubles, and parity of esteem for the Irish identity remain egregiously unfulfilled.

Sadly, British indifference to Northern Ireland is all too easily encapsulated in the recent comment of Home Secretary Sajid Javid who condescendingly characterized concerns for the impact of Brexit on Ireland as “the tail wagging the dog.”   In fact, Britain’s Brexit obsession and dereliction of its Good Friday commitments is awakening the sleeping dogs of conflict and providing the vacuum of leadership in which they thrive..  We are already seeing the frightening consequences of Britain’s apathy to its Good Friday commitments with the recent bombing in Derry, the killing of Journalist Lyra McKee and the attempt on the life of a PSNI officer in Belfast.

The Ancient Order of Hibernians urges the President to make clear that any future trade agreement between the U.S. and the U.K.  is contingent upon Britain fulfilling its existing obligations to the community of Northern Ireland under the Good Friday Agreement.  The United States would be foolish indeed to enter into any new deal with a partner who cannot honor its pledges after twenty-one years.”

Do you agree with the AOH’s sentiments? Let us know in the comments section below.