Does it matter if the IRA oversees Sinn Féin? 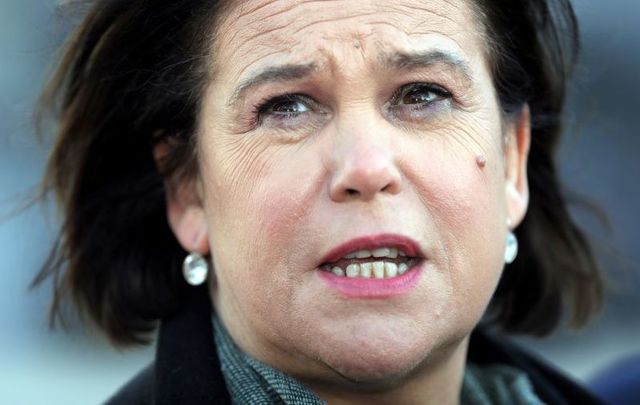 Sinn Féin’s historic performance in Ireland's general election on February 8 opened a debate over whether the party’s continued relationship with the Provisional Irish Republican Army makes it unfit to form part of a government in a liberal democratic society.

These concerns were heightened after intelligence officials reconfirmed a 2015 assessment concluding that the “the PAC [Provisional Army Council, the IRA’s ruling body] oversees both PIRA and Sinn Féin with an overarching strategy.” Sinn Féin supporters contend that that charge is unfair and anachronistic, and that it’s little more than a naked attempt to keep the party from power. But it was one of the central plotlines in the early stages of the government formation talks, and it’s an issue that was never satisfactorily resolved.

With the possibility of Sinn Féin leading a government in the near future, critics claim that this would effectively hand real national power to the IRA, one of the main combatants in the Troubles, in which it was responsible for more than 1,700 deaths. The IRA has always been an openly and, at times, proudly undemocratic entity.

One strain of traditional Irish republicanism holds that the IRA can rightly claim to represent the will of the Irish people based solely on the results of the last island-wide general election in 1921 (this thinking was accepted by Sinn Féin until 1986).

A more broadly accepted claim is that republicans alone nurtured the flame of Irish freedom in times of severe repression while the rest of the country had been bought, coerced, or otherwise subdued, meaning their vision for the future was the optimal path for Ireland, even if the public disagreed. This was the logic used to justify the 1916 Easter Rising.

Moreover, the IRA’s methods for achieving its aims were wholly inconsistent with the civil liberties guaranteed in a constitutional democracy. Rather than convincing the public of the merits of a united socialist republic through reasoned debate and persuasion, it sought to coerce it by bombing civilian targets, massacring innocent people, and engaging in shootouts with the police and army. Those who consider the IRA’s armed struggle and Sinn Féin’s electoral rise as part of the same process understandably imagine an armed group bullying its way to power. For them, this legitimizes the use of violence for political ends, and it reeks of the rot that brought the Nazis to power in Germany in the 1930s.

If Sinn Féin does take direction from the IRA, that would mean that rather than answering to the people it represents—another of the pillars of liberal democracy and the core assumption of classical republicanism itself—an unelected group of “shadowy figures” with no accountability to any other body controls one of the largest political parties in the country, and Sinn Féin in power would give undue influence to that group over the day-to-day operation of the government. The implications for Irish democracy could be severe.

From the outside, it’s not exactly clear how the IRA exercises control over Sinn Féin, but a few reports do provide a good snapshot. Matt Treacy, a former IRA intelligence officer and Sinn Féin advisor, claimed that a portion of the seats on Sinn Féin’s ruling executive council are reserved for senior IRA leaders. “They are the people who make the decisions,” he wrote.

Sinn Féin, of course, strenuously denies that its executive council is controlled by the IRA. Less refutable, however, is that senior party officials do actively seek advice from IRA leaders and those close to the organization. One 2017 case is particularly illuminating. Mairtin O Muilleoir, a former Sinn Féin member of the Northern Ireland Assembly and the country’s then-finance minister, caused a stir when it was revealed that he would not sign up to a renewable energy initiative until he had received approval from Ted Howell, a tremendously influential but highly secretive individual who is believed by some to represent the views of the IRA. O Muilleoir is also known to have consulted senior IRA men around the same time.

But if the IRA is limited to this advisory role, to what extent is that a cause for concern? As former Fianna Fáil deputy leader Eamon O Cuiv pointed out, all parties keep a trusted cadre of unelected and unaccountable advisors that work carefully behind the scenes to provide strategic and ideological insight to decisionmakers. That is a normal (and expected) part of democratic politics. In this view, Sinn Féin relying on a small group of former IRA men in Belfast is little different functionally from Fianna Fáil relying on a small group of academics and public relations experts in Dublin.

More importantly, understanding the Provisional IRA’s current place in Irish society is key to grasping the significance of its political influence. Official security assessments have consistently confirmed that the IRA is almost totally disarmed, it no longer recruits new members, and most of its military structures have been disbanded. The Independent Monitoring Commission reported in 2008 that the organization “is well beyond recall” and “is being allowed to wither away.” What little criminal activity it still carries out is perpetrated only by individuals for personal reasons without Army Council sanction, suggesting that the leadership itself no longer commands effective authority over its members.

The critical aspect of the IRA’s current status is that it is committed to the peace process and to achieving its objectives by political means only. By all accounts, the IRA is a denuded shell of its former self that no longer represents any meaningful threat to the state. Even calling it an army feels like a misnomer, and claiming that Sinn Féin is backed by a “private army” is a gross overstatement.

Some critics will contend that it’s not necessarily Sinn Féin’s present relationship with the IRA that’s the issue; it’s the party’s active glorification of the Provisional IRA’s armed campaign. But this runs counter to the underlying spirit of the 1998 Good Friday Agreement. One of the basic assumptions of the peace process was that republican aims were indeed legitimate and permissible—it was only the IRA’s means that were criminal. Sinn Féin was told that if it brought the armed struggle to an end, fully embraced the state, and decommissioned its stockpile of weapons, it would be treated just like every other party. It did all of those things, and excluding it from an equal place in the political process because it maintains vestigial links to the remnants of the IRA undermines one of the core premises on which peace in Ireland was achieved. As far as the Good Friday Agreement is concerned, the question about Sinn Féin’s paramilitary past is an irrelevancy that was settled more than two decades ago.

Of course, none of this is to say that Sinn Féin doesn’t have notable defects that do raise concerns in a democratic society. Its leadership structure is highly centralized and seems to favor party loyalty at least as equally as political ability. Directives are issued from the top, and the rank-and-file are expected to follow with little reservation, stifling the opportunity for meaningful policy debate. Leaders are not elected by party members; they are appointed (by whom is a separate but related question) and then approved by members in a de facto coronation ceremony. Indeed, the tight-lipped secrecy surrounding John O’Dowd’s fateful attempt to oust Michelle O’Neill as party vice president in November 2019 underscores how thoroughly the leadership is willing to silence and crush threats to its authority.

Sinn Féin’s narrow chain of command necessarily gives outsized influence to the mandarins at the very top of the organization, and because that group does coordinate with the Army Council on key policy decisions, it means that the IRA has greater influence over Sinn Féin than advisors do in other parties.

Sinn Féin is still an abnormal parliamentary party, but it did not reach the doorstep of power by bombing and shooting its way there. Over the course of a few decades, the party gradually accepted the legitimacy of various aspects of the state, and each time it did, it shed more of its hardline characteristics and moved deeper into the political mainstream.

In the end, Sinn Féin arrived at this point carrying only the lifeless corpse of the IRA and a nostalgic view of militant republicanism as the only relics of its armed campaign. The fact that it achieved its current mandate exclusively on the state’s terms is a testament more to the strength of Ireland’s democratic institutions than to the bullying tactics of Sinn Féin. The party will still employ questionable means to conduct its internal business, but when it legislates, writes policy, and potentially gives direction as part of a future government, it will play only by the rules of liberal democracy.