Clinton says her election after-party felt "like an Irish wake"

The former Secretary of State is also critical of Trump on a deeply personal level – “I sometimes wonder,” she writes, “If you add together his time spent on golf, Twitter, and cable news, what’s left?” 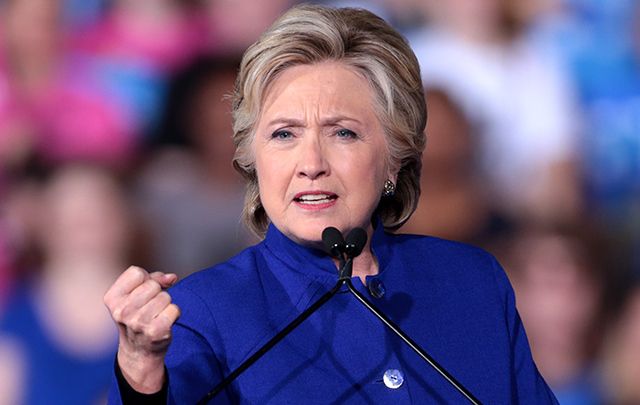 In her new book “What Happened”, Hillary Clinton examines her 2016 election loss to Trump, dishing out criticism for him and primary rival Bernie Sanders. WikiCommons

In her new book “What Happened”, Hillary Clinton examines her 2016 Presidential election loss to Trump, dishing out criticism for him and primary rival Bernie Sanders.

Hillary Clinton bluntly recalls that her election after-party felt not so much like a party but like an “Irish wake.”

Writing in her book, “What Happened,” she explains why she thinks she lost the election almost every professional political pundit expected her to win handily.

“It felt a little like an Irish wake: celebration amid the sadness,” Clinton mournfully recalled.

“Let it never be said that the Hillary for America staff didn’t stick together when it counted. To help matters, there was an open bar.”

The memoir is significantly more candid than her previous two when her sights were firmly trained upon the White House. Whereas before she tactfully chose her words, in her new memoir she lets rip about Donald Trump, the media, Bernie Sanders, and Putin.

“If he [Trump] stood up tomorrow and declared that the Earth is flat, his counselor Kellyanne Conway might just go on Fox News and defend it as an ‘alternative fact,’ and too many people would believe it,” she states witheringly.

And she’s also critical on Trump on a deeply personal level.

“I sometimes wonder: If you add together his time spent on golf, Twitter and cable news, what’s left?”

She cautions that the President harbors the same authoritarian tendencies as Vladimir Putin.

“He seems to want to be like Putin, a white authoritarian leader who could put down dissenters, repress minorities, disenfranchise voters, weaken the press, and amass untold billions for himself. He dreams of Moscow on the Potomac.”

While Trump has yet to publically address the book, he did tweet yesterday morning about people writing about him in what many perceived to be a denunciation of Clinton’s work.

Fascinating to watch people writing books and major articles about me and yet they know nothing about me & have zero access. #FAKE NEWS!

Former FBI boss James Comey unsurprisingly comes in for criticism, too. Recalling how she felt after learning that he had reopened an investigation into her e-mails in October, mere days before election  day, Clinton wrote that she felt “shivved".

“This man is going to be the death of me,” her long-time aide and close confidant Huma Abedin said to her on one occasion before dissolving into tears.

She adds that she felt it was "incredible to see Comey go from villain to martyr in five seconds flat" after his firing by Trump.

"I read [Deputy Attorney General] Rosenstein's memo [recommending that Comey be fired] in disbelief," she continues.

"Here was Trump's number two man at the Justice Department putting in writing all the things I'd been thinking for months ... It was as if, after more than two years of mass hysteria, the world had finally come to its senses. But the story quickly fell apart."

With resignation, she recalls having to attack Bernie Sanders’ policies as too extravagant and unrealistic – costing her dearly with her party’s left-wing base.

“That left me to play the unenviable role,” she mournfully records, “of spoilsport schoolmarm.”

Throughout the campaign, Clinton was dogged by charges of inauthenticity; occasionally she revealed more of herself than wise, such as when she decried so many Trump supporters as “deplorables”, but for the most part she presented herself as a buttoned-up bureaucrat.

Had she been so blunt before could she have won it? What do you reckon? Let us know your thoughts in the comments section, below.