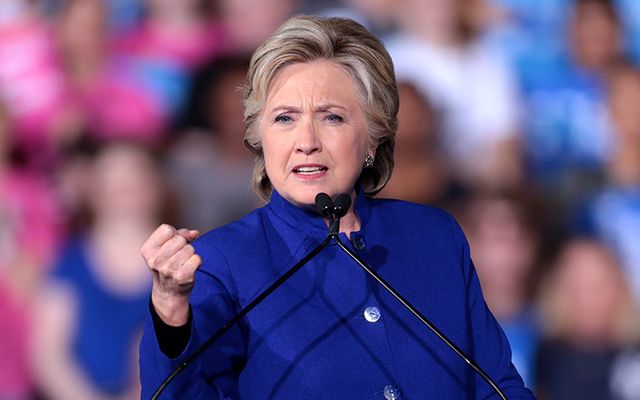 “By the time they finished with me, I was Typhoid Mary,” said former Secretary of State Clinton.

Using the analogy of Typhoid Mary and blaming part of her loss of the election on misogyny, Clinton told the Women in the World summit she “spends a lot of time wrestling” with the fact that 53% of white women voted for Trump.

Mary Mallon, the first person in the US identified as carrying typhoid without displaying any symptoms, was quarantined and kept alone for decades. She was once described as the most dangerous person in America.

“Poor Mary, she didn’t deserve it either, when you go back and look at the history,” said Clinton.

"By the time they finished with me, I was Typhoid Mary" -Clinton on her popularity as secretary of state and after https://t.co/8zvmKUw3p0

Co. Tyrone born Mary Mallon, commonly known as “Typhoid Mary”, was the first healthy typhoid carrier to be identified by medical science. She became famous after giving rise to the most famous outbreaks of the carrier-borne disease in medical history and was blamed for 51 cases and 3 deaths of typhoid.

Born in 1869, she moved to the US in 1884 working as a cook for families throughout New York City. When several members of the family of New York banker Charles Henry Warren fell ill with typhoid while she worked with them, it emerged that a run of families had suffered the same fate while she was in their employment.

Mallon had never shown any outward signs of the disease, however, and felt persecuted as a fully healthy person wrongly blamed for the illness of others.

“I never had typhoid in my life, and have always been healthy. Why should I be banished like a leper and compelled to live in solitary confinement with only a dog for a companion?” she argued.

She even took it upon herself to sue the health department, eventually being released from quarantine in 1910. Her freedom didn’t last for long, however, as having changed her name to allow herself to work in kitchens again, she was found to be the cause of an outbreak of typhoid fever in the Sloane Maternity Hospital.

This time she was to remain in an isolated cottage on North Brother Island for the rest of her life.

In the wide-ranging live interview with New York Times columnist Nicholas Kristof, Clinton also spoke of the need for intervention in Syria just hours before it was reported President Trump had launched a missile strike on a Syrian government airbase believed to be responsible for the deaths of at least 72 civilians in a chemical weapon attack earlier this week.

“I really believe we should have and still should take out his airfields and prevent him from being able to bomb innocent people and drop sarin gas on them,” said Clinton, reiterating that in 2012 a plan to arm rebels she put forward with then-CIA director David Petraeus was rejected.

“I thought we should have done more at that point,” she said.

The former Secretary of State also expressed her hope that US politicians could come together and “start acting like patriotic Americans” to investigate the possibility that Russia interfered with the 2016 election.

“What was done to us was an act of aggression and it was carried out by a foreign power under the control of someone who has a deep desire to dominate Europe and to send us into a tailspin,” Clinton said.

“What Putin wanted to do was sow distrust and confusion as well as influence our election.

“I’m hopeful Congress will pull together and realize because of the success the Kremlin feels it had, they’re not going to go away.”

Taking a hit at her former election rival Trump, Clinton declared that Putin did not like strong women “although he did shake hands with me”, a clear criticism of Trump’s refusal to shake the hand of German leader Angela Merkel when she visited the White House last month.

Clinton, who was greeted with a standing ovation from the crowd when she appeared, also stated that she found it “somewhat gratifying” that President Trump has so far been unable to repeal or replace Obamacare.