Hillary Clinton is “devoted to the future" of Ireland

The former Presidential candidate has been keeping an eye on developments in Northern Ireland. 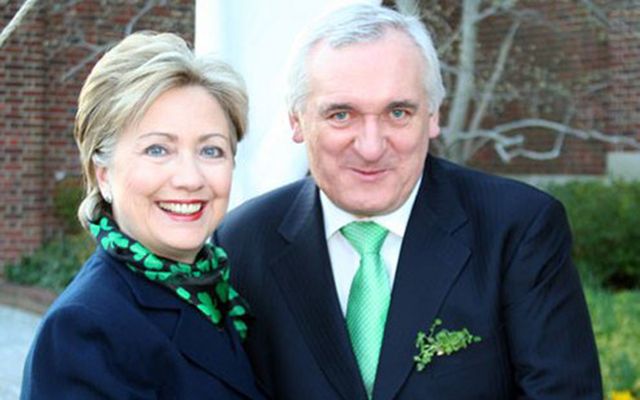 Hillary Clinton has said she remains “devoted to the future” of Ireland.

The former Secretary of State gave an interview to RTÉ’s ‘Late Late Show’ to promote her new book, “What Happened”, and revealed she was still keeping up to date with the Northern Irish politics.

"I am a little worried right now, to be very candid with you,” she said of the failure to restore power sharing in the province. "I am listening to and hearing reports about the loggerheads people find themselves at."There has just been so much progress, I don't want to see it lost."

Northern Ireland’s Assembly collapsed at the beginning of the year amidst controversy about a renewable heating scheme; subsequent efforts to restore power sharing have floundered with Sinn Féin and the Democratic Unionist Party unable to reach agreement on key issues like gay marriage and an Irish Language Act.

She was however fulsome in her praise for the late Deputy First Minister and former IRA commander Martin McGuinness.

"I had the opportunity to work with Martin and so many others on both sides of the sectarian divide in the north and we forged a personal relationship,” she said.

"So when I was a First Lady and a senator, I tried to be supportive in every way I could and when I was Secretary of State I made it a point to continue that support in an official capacity because I didn't want the progress that had been made to be lost."

Read more: What did she ever do for Northern Ireland? Hillary Clinton’s track record

For his part McGuinness always spoke fondly of the Clintons and said Hillary had been one of Ireland’s “best friends” whilst working in Washington.

"It has been an absolute privilege to be in some small way involved in everything that is going on," she concluded.

Bill and Hillary Clinton disembarking Air Force One in Ireland, 1995.

The highly publicized book reveals that Clinton felt her election after-party was, “ a little like an Irish wake: celebration amid the sadness.”

She also writes that she felt “shivved” when the then FBI Director James Comey announced he was reopening the investigation into her use of a private server to send emails whilst Secretary of State.

President Trump, her social media happy opponent, did not respond directly to press reports about the book but he did tweet cryptically about people who wrote about him.

Fascinating to watch people writing books and major articles about me and yet they know nothing about me & have zero access. #FAKE NEWS!

Here's an interview between Ryan Turbridy, for the Late Late Show, and Hillary Clinton: