Remember when Gerry Adams was refused entrance to the White House? Well, the reason why his visit caused such as fuss has now been revealed. 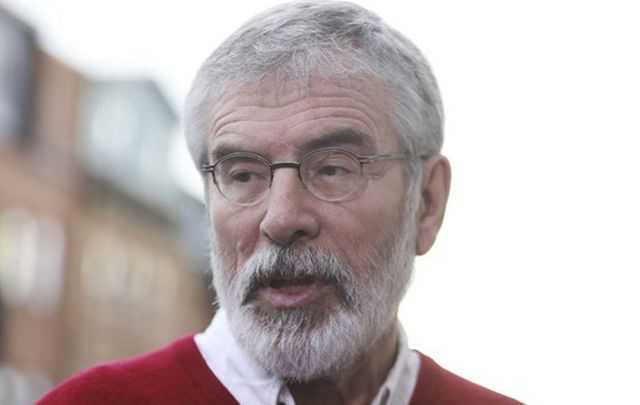 Gerry Adams was less than impressed to be left standing at the door to the White House on St.Patrick's Day. RollingNews.ie

A Secret Service mix up in which they believed Gerry Adams to be the nickname of another St. Patrick’s Day party attendee instead of the real name of the Sinn Féin President has been released as the true reason why the Louth TD was denied entrance to the White House event in 2016.

“I had received my usual invitation to attend the St. Patrick’s Day celebrations in the White House and was pleased to accept,” Adams said at the time.

“When I arrived the staff at the White House informed me that there was an issue of ‘security’.

“After two decades of travelling back and forth to the USA and countless meetings in the White House with successive US Presidents, this is an unacceptable development.”

Gerry Adams need not succeed in going to the White House St. Patrick's Day soirée in 2016.

While the US Secret Service apologized to the Sinn Féin leader immediately after the confusion occurred, documents acquired by RTÉ recently under the Freedom of Information Act have show what a “firestorm” was created by the Irish politician and his supporters on Capitol Hill.

It appears that when Adams arrived at the party hosted by former US President Barack Obama, his name was not covered by security clearance but that an email was sent to a member of the organization dealing with security to clear up the matter. Unfortunately, the person in question was out for a run and Adams had already grown impatient and left by the time they got back to their inbox.

"Ha. Sorry, went for a run. Had to get out in this good weather,” the member of the Secret Service replied to their colleague.

Gerry Adams was left waiting for over an hour before eventually leaving the White House.

"Yesterday I went for a run at 5 pm and did not get back until 5.45 pm when I saw the email,” they said in a follow up email the next day.

It also appears that the confusion caused problems for some days with several emails between the White House and Secret Service discussing negative press and a letter of complaint from Irish-American congressmen.

"I walked into a firestorm ... the last flames are just being put out as we speak. Wow, what a day!" one agent wrote.

Another confirmed how Gerry Adams was "being very vocal about this and has gone to the press saying he was denied entry which we obviously know isn't true."

We're sure Adams will have better luck with his old friend Trump from here on out.

Adams being left out in the cold had left many Irish American leaders baffled and members of the Friends of Ireland Caucus in the United States House of Representatives addressed a letter to Chief of Staff Denis McDonough expressing their outrage that Adams was denied entry to the reception.

Signed by Members of Congress including Richard E. Neal, Peter King, Brendan Boyle, Joe Crowley, and James P. McGovern, the letter stated: “For more than three decades, the United States government has continuously encouraged the political parties in Northern Ireland to take risks for peace. But instead of being rewarded for their efforts, many members of Sinn Féin are now being punished. This unfortunate behavior seems to be happening with increasing regularity.”

The Secret Service immediately issued an apology in March 2016 stating: “The Secret Service would like to express our regret that the issue involving Mr Gerry Adams’ entry into the St. Patrick’s Day reception could not be resolved in a more timely manner.

Joe Crowley was among those to sign the letter in protest against Gerry Adams' treatment.

A spokesperson for Sinn Féin told RTÉ yesterday that a different reason was given for Gerry Adams’ refused entry to the White House on that St. Patrick’s Day but acknowledged that the White House and Secret Service had apologised.

Did Gerry Adams overreact to the delay in allowing him entrance to the White House on St. Patrick’s Day 2016?