"The tributes will doubtless begin flowing in as well as the usual vitriol from his enemies. Like all great politicians, he has collected his share of them." 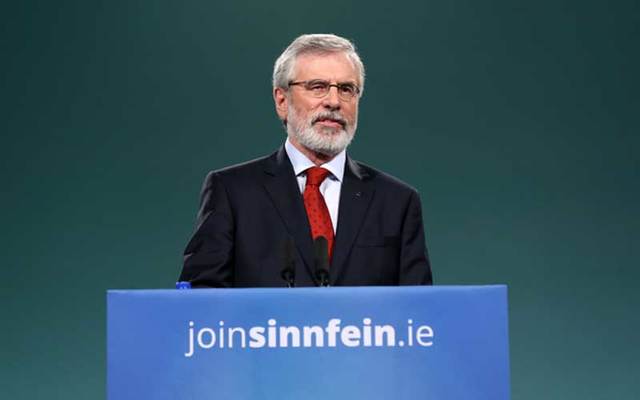 Gerry Adams speaking during his Presidential Address at the Sinn Fein Ard Fheis in the RDS In Dublin on Saturday. Rollingnews.ie

The tributes will doubtless begin flowing in as well as the usual vitriol from his enemies. Like all great politicians, he has collected his share of them.

A recent biography of him by Malachi O’Doherty, no fan of his, stated in its first line, “Gerry Adams is one of the most successful politicians in the democratic world.” That about sums him up.

He has been the leader of Irish Republicanism since 1983, the successor to Pearse, Thomas Francis Meagher, James Stephens, leader of the Fenians and others who unfurled the flag of Irish revolution. As a result, he is the most important historical figure of his era.

Bill Clinton paid what I consider the greatest tribute to Gerry Adams when discussing the Middle East failed peace process with a small group of Irish Americans last year.

“If Yasir Arafat was Gerry Adams we would have had peace in the Middle East.” That’s an actual quote.

His point was clear: when it came down to it in the fraught moments of negotiations between Clinton, the Israelis and the PLO, Yasser Arafat could not deliver his side on an agreement that was certainly the best ever on offer. Adams never made that mistake.

Gerry Adams and Martin McGuinness could and did deliver an IRA ceasefire and a paradigm shift in the Republican movement from war to peace that is still stunning to contemplate.

Adams is the key Irish figure of this era, he changed Irish politics completely with his peace strategy, his outreach to moderate nationalism and America, his skill in managing the rise of Sinn Fein, north and south.

The party has gone from hopeless also-rans in political contests to a party that will very likely be in government both North and South in the next few years.

They are doing so at a time when the issue of a united Ireland, long a pipe dream, has suddenly come front and center through the work of Adams and the British foul-up called Brexit A recent poll in Northern Ireland showed those under-45 preferred a united Ireland which included a large number of unionists.

Bringing a united Ireland center stage looked an impossible task from the outside but all of Adam's goals were accomplished with a single-mindedness of purpose the level of which I have never witnessed in any other politician or person.

It involved defying assassination attempts on his life, enduring jail time during internment without trial, making enormously personal sacrifices on his family front and above all an indefatigable belief in the rightness of his quest.

The Hume/Adams talks, involving nationalist leader John Hume kicked off the peace process and were immediately savagely attacked by the neo-unionist cabal in the Irish media that wanted to preserve partition at all costs.

Despite the overwhelming criticism (The Sunday Independent newspaper had 15 articles in one issue attacking Hume for daring to speak to the untouchable Adams) the talks were a success.

Adams next task was a reach out to new Irish leader Alert Reynolds and Irish America. The Reynolds rapport led to the American breakthrough as Irish America maneuvered a visa for Adams to come to America thanks to dedicated work to bring new president Bill Clinton on board.

In all his dealings he had by far the toughest task-using all his ability to influence the IRA to take a chance on peace negotiations without a serious split which was something no other Irish leader ever accomplished --- Michael Collins died trying.

Read More: Gerry Adams likely to step down as President of Sinn Féin

He did so amid a hail of horrific abuse and attacks by the neo-Unionists who controlled large sections of the Irish media.

Disgusted that they could not demonize the nationalist people and end forever any hope they had of ending partition, they portrayed Adams as an alien upstart from “Up There” meaning Northern Ireland but Adams saw them off by producing the one thing they could not imagine --- a power-sharing government in the north with Sinn Fein just one seat away from being majority party and now very much a rising power in the Irish Republic.

The pressure did not just come from the nabobs of neo-unionists like Conor Cruise O’Brien who predicted 100,000 deaths when news of the peace process broke.

He also stared down splinter groups from the IRA who threatened to demolish the peace. It was an incredible balancing act for one man.

Renowned journalist Vincent Browne once wrote that without Adams The Troubles would have started, but without him, they would never have finished. Browne got it just right.

He and Martin McGuinness risked life and limb to bring about that peace. They could easily have just remained in their expected roles, but they chose to risk everything.

The peace process remains an extraordinary achievement. I have been privileged to witness many of the great moments, the first U.S. visa for Adams from President Clinton in 1994, the first IRA ceasefire, the first visit of an American president to Northern Ireland, the first day of the Northern Ireland assembly, etc. Adams was central to everyone of them. It is some legacy.

Through it all, he never lost sight of the political reality. He represented the minority community in Northern Ireland forced to accept a partition of Ireland the Irish people had never agreed to.Self-determination applied only to unionists. The croppies had to lie down and accept it.

Gerry Adams made sure that would never be the case.

Read More: Sinn Fein and Gerry Adams will never give up

Now he has announced he is stepping away sometime next year.

He has done exactly the right thing, allowing the next generation the time and opportunity to develop the strategy for power North and South.

There will be the political pygmies who will rant and foam about his legacy and history. It must upset them that history will view him as the potential leader of his generation for all he accomplished.

The Irish say "Ni Fheicimid a Leitheid Aris" which translates as “We will never see his likes again.” In this case, it is absolutely true.