Gerry Adams likely to step down as President of Sinn Féin

There are rumors that Gerry Adams would like to stand in Ireland’s Presidential election due next year. 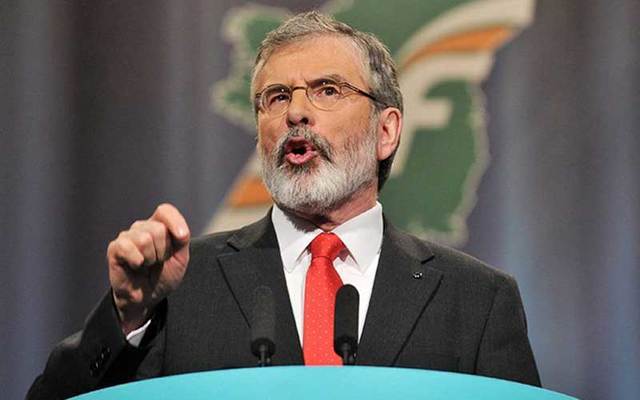 Sinn Féin President Gerry Adams has strongly hinted that he is soon to retire.

68-year-old Adams told a party meeting he will stand for re-election at the party’s Ard Fheis (conference) this November but will also spell out when he will hand over the baton to the next generation.

“If elected I will be setting out our priorities and in particular our planned process of generational change, including my own future intentions," he said.

It’s not the first time Adams has admitted he won’t be Sinn Féin’s leader forever; last year he and his long-serving right-hand man, Martin McGuinness, said they had a ten-year leadership plan that would see the pair eventually cede power to younger figures in the party.

But that was before McGuinness was diagnosed with a terminal illness and his death earlier this year upended their succession plans.

Tyrone legislator Michelle O’Neill assumed the leadership of the party in the north and Adams’ current deputy, Mary Lou McDonald, is the bookies’ favorite to replace him as the party’s overall President and leader in the Republic.

The party is aiming for Government at the next general election which must be held by 2021 at the latest. It’s currently polling in third place but neither the leaders of the two larger Fine Gael or Fianna Fáil parties have much time Adams or the party in its current form.

New leadership could cleanse the party of much of its historical baggage from the Troubles; Adams has been leader since 1983.  Despite a pivotal role coaxing his party away from its support for armed struggle and into a new era of peace, many southern voters would say there’s more than a whiff of a gunpowder about him.

In 2014, with Ireland on the cusp of elections to the European Parliament, Adams was arrested and questioned in relation to the killing of Jean McConville - a mother of ten murdered by the IRA in 1972.

Adams denied any wrongdoing and was released without charge. He has long waved away accusations that he was a member of the IRA - something that led to infrequent mockery from former Taoiseach (Prime Minister) Enda Kenny.

“Nobody believes you,” Kenny told him once in Dáil Éireann (Parliament) after he denied the allegation.

New leadership might change the ritual denials from other parties that under no circumstances will they go into Government with Sinn Féin. The party has hoovered up working-class support from the Irish Labour party in recent years and few commentators would rule out the possibility that the party could hold the balance of power in the next Dáil.

Alternatively, it’s rumored that Adams fancies a tilt at the Irish Presidency; McGuinness stood in 2011 for the ceremonial position but came third with slightly under 14%.

His bid was weighed down by his republican past and encounters with angry families of IRA victims often dominated headlines; if he runs Adams will face similar a similar problem.

Incumbent Michael D. Higgins has yet to indicate whether he’ll seek a second term; in 2011 he pledged to serve for only one seven-year term but is thought to fancy a second and polls suggest it’s his for the taking.

He’s popular in the polls but at 76 he might decide he’s had a good run of it and retire back to Galway.

That would leave the race wide open and Adams enjoys near universal name recognition. Who could predict what would happen then?