“He was also a political prisoner, a negotiator, a peacemaker, a healer… he was famously and hugely interested in people.” 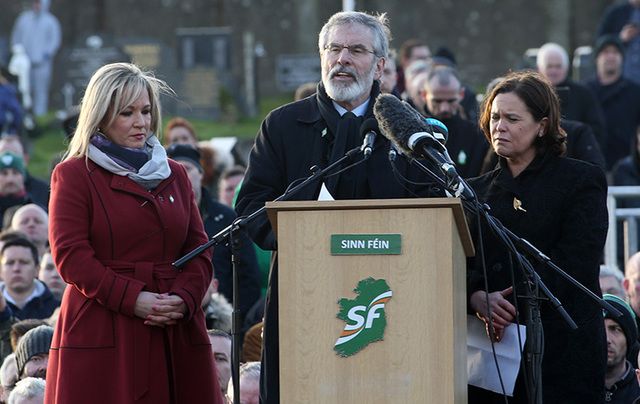 Sinn Fein leader Gerry Adams called Martin McGuinness a freedom fighter, not a terrorist, in his graveside oration in Derry for his old friend.

“Martin McGuinness was not a terrorist. Martin McGuinness was a freedom fighter. He was also a political prisoner, a negotiator, a peacemaker, a healer. But while he had a passion for politics Martin was not one dimensional. He had many interests, especially in nature, in spirituality, and he was famously and hugely interested in people.”

McGuinness, he said, was born into an “Orange state which did not want him or his kind,” adding that “the Orange state’s violent suppression” of civil rights and “the emerging conflict propelled Martin into a life less ordinary.”

“Martin believed in freedom and equality. He resisted by armed actions those who withheld these rights, and then he helped shape conditions in which it was possible to advocate for these entitlements by unarmed strategies.

“Throughout it all Martin remained committed to the same ideals that led to his becoming a republican activist in the first instance – the pursuit of Irish unification, freedom, respect, equality and respect for all. 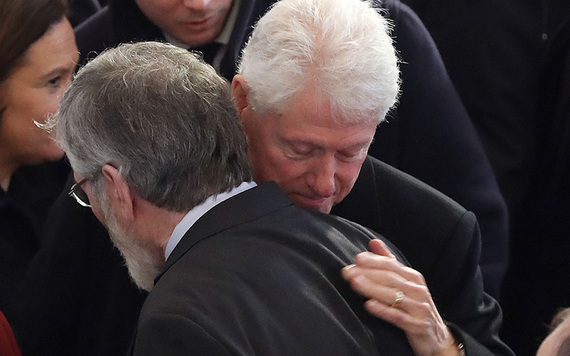 “Martin believed that the British government’s involvement in Ireland, and the partition of our island, are at the root of our divisions. He was absolutely 100 percent right about that.

“He was also tough, assertive and unmovable when that was needed, dogmatic at times. Wimps don’t make good negotiators – neither do so-called hard men. Martin learned the need for flexibility,” he added.

“That is the real test of leadership – to reach beyond your own base. It is a test that Martin passed every time.”

Adams also made an appeal to unionists. “Let us learn to like each other, to be friends, to celebrate and enjoy our differences and to do so on the basis of common sense, respect and tolerance for each other and everyone else – as equals,” he said.

McGuinness was “another of those great and remarkable men and women who have stood up for Irish freedom and for what they believed to be right.

"By his example he showed us that it is possible to build peace out of conflict, to build a better and more equal future based on fairness, and to build unity out of division. Martin will continue to inspire and encourage us in the time ahead.”

Here is the burial of Martin McGuinness in full: