President Ursula von der Leyen has instructed Ireland to nominate a male candidate and a female candidate to be considered for the role of EU Trade Commissioner. 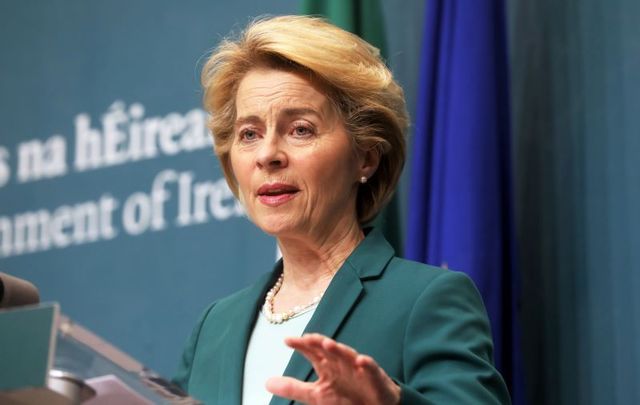 January 15, 2020: President of the European Commission Ursula von der Leyen speaking at government buildings during a visit to Ireland. RollingNews.ie

Hogan submitted his resignation on Wednesday, August 26, less than a week after he was implicated in the so-called “Golfgate” scandal in Ireland.

In a brief statement posted to the European Commission’s website on August 26, President von der Leyen said: ”Commissioner Phil Hogan has submitted his resignation. I respect his decision. I am very grateful to him for his tireless work as a Trade Commissioner since the start of this mandate and for his successful term as Commissioner in charge of Agriculture in the previous College. He was a valuable and respected member of the College. I wish him all the best for the future.”

In a press briefing the following morning, President von der Leyen said: “Last night, Phil Hogan submitted his resignation from the post as the Trade Commissioner. I respect this.

I am grateful to Commissioner @PhilHoganEU for his tireless & successful work @EU_Commission.

I invite the Irish government to propose a female and a male candidate. In the meantime, VP @VDombrovskis will assume responsibility for trade. pic.twitter.com/yRL5hE2ulG

“I am very grateful to Phil Hogan for his tireless and successful work as a Commissioner as a member of the college, and I thank him warmly for his valuable contribution to the work of the Commission not only in this mandate but also in the previous mandate where he was Commissioner in charge of Agriculture and Rural Development.

“Over the past days, I discussed with Phil Hogan about his movements in Ireland in light of information that emerged regarding respect of public health guidelines in Ireland.

“In the current circumstances, as Europe fights to reduce the spread of the coronavirus, and as Europeans make sacrifices, and accept painful restrictions, I expect the members of the college to be particularly vigilant about compliance with applicable national or regional rules or recommendations.

“Executive Vice President Valdis Dombrovskis will assume interim responsibilities for trade matters, and at a later stage, I will decide on the final allocations of portfolios in the college of Commissioners."

Speculation is now swirling as to who may take over Hogan's role.

Later on Thursday, Tanaiste and former Taoiseach Leo Varadkar, who is currently the head of Irish political party Fine Gael, said it is not his intention to fill Hogan's empty seat.

Varadkar told reporters on August 27: “My intention is to continue to lead my party, to work hard in my job as Tánaiste and Minister for Enterprise Trade and Employment, and to become Taoiseach again in 2022.”

When asked if he had regrets about Hogan’s actions that culminated in his resignation, Varadkar said: “Of course I do, Phil’s a good colleague, a very good friend, and somebody who I reappointed as Commissioner, because he did such a good job in his previous role.

“The situation developed as it did, he was given an opportunity to explain his whereabouts and his movements within Ireland and to confirm that he had been following the public health guidelines, and unfortunately over a period of days it transported that he had not.

“But, ultimately, this was a decision that was made by President von der Leyen, not by the Irish government, but I think it was the right decision in the end. Of course, lots of regrets.”

He added: “I think there’s a distinction between private citizens and public representatives but I do hope that the events of the last couple of days do in some way demonstrate that Ireland is a country where the rules and the laws and standards and guidelines do apply to everyone equally.”

While Taoiseach Micheal Martin admitted that Varadkar is “a person of considerable calibre,” he said government leaders have yet to discuss their nominations.

“The bottom line here," Martin said, "is the three leaders are going to meet to discuss this entire situation, nothing has been discussed in terms of any particular individual, up to now, and we will have a meeting to discuss that.”

Simon Coveney, Ireland’s former Tanaiste and current Minister for Foreign Affairs, is the bookies favorite to be nominated as the next EU Trade Commissioner. The Irish Examiner says a government source confirmed that Coveney is “willing and able” for the job.