Trump is famous for his aggressive, extended handshakes. How do you think the Irish leader did? 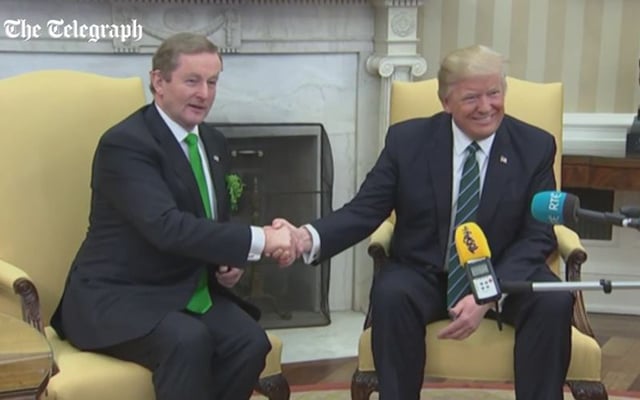 Trump is famous for his aggressive, extended handshakes. How do you think the Irish leader did? The Telegraph / Screengrab

Donald Trump's aggressive, overly-long handshakes have quickly become a hallmark of his interactions with foreign leaders as president, so one of the questions leading up to Irish leader Enda Kenny's White House visit today (right after a pathway to legalization for undocumented immigrants and other far more pressing matters) was how their handshake would go.

Kenny certainly seems to have fared better than Japanese Prime Minister Shinzo Abe, whose handshake with Trump lasted an increasingly awkward 19 seconds, though The Telegraph maintains that "Donald Trump reins in his widely known dominant handshake with Irish Prime Minister Enda Kenny." Indeed, he does not seem to have mastered the encounter as well as Canadian Prime Minister Justin Trudeau.

In many ways, the Trump-Kenny handshake is perfect opposite of last year's St. Patrick's Day handshake gaffe, in which President Obama did not see that Taoiseach Kenny was going in for a handshake at all: