COVID vaccines hailed in Ireland, but still no Christmas hugs for public

Ireland celebrates Irish involvement in two of the newly discovered coronavirus vaccines as Christmas easing of restrictions is discussed. 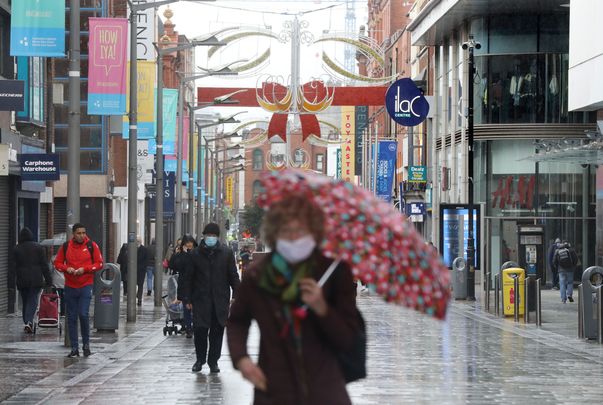 Christmas 2020: A woman wearing a mask to protect herself and others against COVID walks down Henry Street. RollingNews

Ireland this week celebrates the contribution of two of its scientists to the latest successful COVID vaccine discovery – but there will still be no hugging between relatives on Christmas Day as the nation prepares to ease travel rules within the country.

The Irish Examiner reports that following a meeting of the leaders of the three coalition parties in government on Monday night, there was agreement that the current nationwide tight Level Five restrictions will be reduced to the less stringent Level Three next week.

That would still prevent people from exiting their own county, but ministers plan to ease that restriction in the days before Christmas to permit “unfettered” movement across the country to allow families to come together.

Government and medical advice is expected to add a caution that greeting relatives should be wary of very close contact like hugging.

All retail, gyms, and hairdressers will be able to open from next week, while a decision on restaurants and pubs with food is likely to be announced this weekend or a little later, depending on progress in diminishing COVID illness figures.

There is strong speculation that so-called “wet” pubs which do not serve food will remain closed until next year.

At the start of this week in the Republic, the number of cases of the disease was 252, the lowest daily rate since September 26.

The government had hoped that by the end of the six weeks of Level 5 it would drop below 100.  That’s still possible, but with under a week to go ministers seem prepared to accept a daily illness rate of less than 200 should be sufficient to ease restrictions.

As the Republic prepares to ease restrictions Northern Ireland introduces a new two-week lockdown this Friday following receipt of a £400 million sterling support package from the British Treasury.

Officials confirmed that discussions are being held between the U.K. and Ireland around arrangements for the Christmas period under COVID-19 restrictions.

In a statement, U.K. Cabinet Office minister Michael Gove’s office said it is recognized that people in Northern Ireland will want to see family and friends across the island of Ireland.

Meanwhile, all Ireland is celebrating the contributions of professors Adrian Hill and Teresa Lambe to vaccines which, the Irish Daily Mail predicts, could return life to normal by May.

Lambe, a native of Kilcullen, Co. Kildare, helped design the Oxford vaccine in partnership with pharmaceutical firm AstraZeneca, details of which were released this week. Like the Pfizer and Moderna jabs, details of which were released last week, the Oxford produce has a 90 percent effective rate. It can be stored and transported in a normal fridge, while the other two require deep freeze.

Hill, originally from Ranelagh, Co. Dublin, is the director of Oxford University’s Jenner Institute which developed the Moderna vaccine.

Following approval by regulators, administrations of the vaccines could start next month and Ireland is in line for up to four million doses.

They are most likely to be given first to those who are most at risk from COVID-19 by the end of the year and the rest of the population in the following months up to May.