Could Caroline Kennedy be the next Hillary Clinton and run for president?

The most private member of the Kennedy family rumored to be considering a run at office. 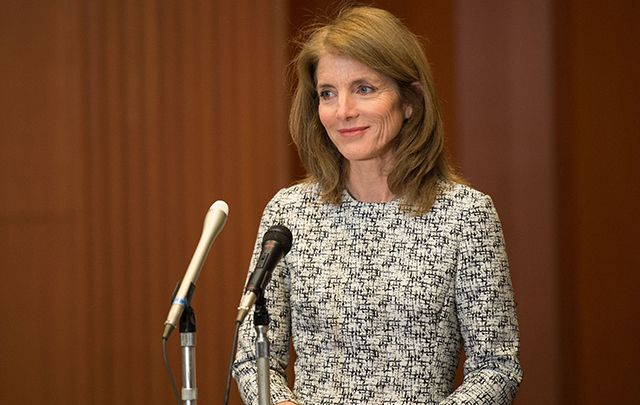 Could we see another Kennedy in the Oval office? Family insiders are suggesting former US Ambassador to Japan Caroline Kennedy may have her sights set on the White House in the future, following her three-year stint in Tokyo.

Kennedy, 59, was appointed by Obama in 2013 and was the first female US Ambassador to Japan. After her successful run, during which she was at times treated as a celebrity, John F. and Jackie Kennedy’s daughter could be setting her political aspirations even higher.

Although she ostensibly returned to New York to pen a memoir, sources close to Kennedy are suggesting she may be the perfect candidate to take up the Democratic mantle and return the Kennedy political dynasty to both the US Senate and to the Presidency.

“She’s kept a diary for years. She has quite a story to tell,” a source told the New York Post.

“Caroline had a successful ambassadorial run in Japan and feels really very confident about putting her hat in the ring for a New York congressional or Senate seat, with even possibly bigger political objectives down the road.”

She was previously regarded as a contender for the US Senate seat left vacant when Hillary Clinton was named Secretary of State, but Kennedy dropped her bid, mysteriously citing “personal reasons.”

Despite this, the chance to occupy a Senate seat in New York, as her beloved uncle Robert F. Kennedy did, has not left the thoughts of the Columbia Law Graduate and mother of three, with claims she could look to contend for the seats of New York’s junior Democratic senator Kirsten Gillibrand or liberal democrat Rep. Carolyn Maloney as early as 2018.

The Post reports she may even be the next Hillary Clinton. Despite her family’s often scandalous history, the Post believes she would come to the table with less controversy surrounding her than the former Secretary of State.

“Caroline is seen in some quarters as the next Hillary Clinton. She has the Kennedy name but no Clinton baggage,” states another source

A liberal democrat in the same ilk as the previous generations of her family, Kennedy was previously lauded as the next face of the clan and, if her net worth is anything to go by, she definitely has the funds to create a campaign that will put her in serious contention.

Bloomberg and CNN estimate her net worth to be anywhere between $80 million and $500 million, while the Post claims she has an annual income of between $12 million to $30 million from Kennedy trust funds.

“The presidency is on her mind now, believe me,” an insider said.

Although many were skeptical about Kennedy’s appointment in Japan due to her lack of substantial government or policy experience, the 59-year-old proved herself to be a highly popular ambassador to Japan, her contribution even being described as “historic” by Yoichi Funabashi, chairman of Rebuild Japan Initiative Foundation.

The high regard of the Japanese for Kennedy could be seen late last year when her holiday message to the people of Japan went viral.

Kennedy stepped down from her position in Japan on January 18 after the transition team for President Trump ordered all political appointees to step down by his inauguration day.

She referred to her time in Japan as the “greatest privilege” of her life but was mocked by President Trump while he was on the campaign trail for being too weak with the Japanese government. “She’ll do anything they want, anything!” he claimed.

Those who worked with her disagreed, however, explaining how she artfully used the love for her father in Japan and her close ties with President Obama to build strong relationships as the US envoy.

“She transformed herself from a celebrity into an influential public figure and statesman who became trusted, liked and listened to,” Daniel R. Russel, assistant secretary at the Bureau of East Asian and Pacific Affairs in the State Department told the New York Times.

Caroline Kennedy, a writer, lawyer, and diplomat, is the only surviving child of John F. Kennedy and Jacqueline Kennedy Onassis.

Born in New York in 1957, she is regarded as one of the most private in the Kennedy family, despite spending some of her earliest years in the White House and becoming something of a media darling during her father’s short-lived Presidency. She was only five years old when her father was assassinated in 1963.

After JFK's death, Jackie moved the family first to Georgetown and then to New York. Caroline took on her first personal political role while interning for her uncle Ted Kennedy during the summers while she was in college. She delved into constitutional law but avoided the political spotlight until 2000, when she agreed to chair the Democratic National Convention.

Kennedy is married to museum exhibit designer, Edwin Schlossberg and they have three children: Rose, Tatiana, and Jack.