It is reported that the Police Service of Northern Ireland has requested some 1,000 extra officers in case of violence stemming from no deal being made in Breixt. 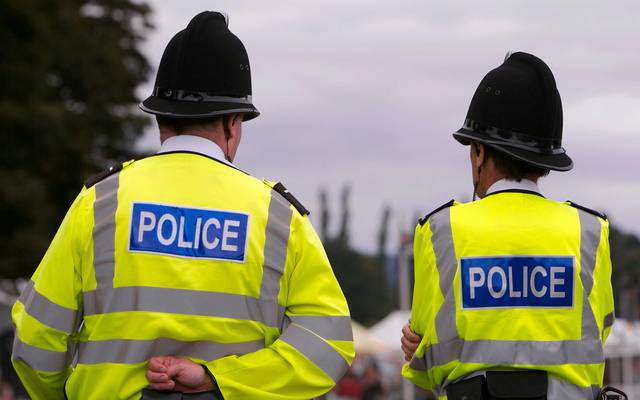 Two British Police Officers guard the entrance to the arena of a Summer Fair, on a typically gloomy British Summers day. Getty

Fears of Republican retaliation if extra English and Scottish police officers arrive in Northern Ireland in the event of a no-deal Brexit.

As many as 1,000 extra police officers from Britain have been requested by the Police Service of Northern Ireland, according to reports from The Guardian. Although no formal request has yet been made, it is believed that chiefs from the PSNI have asked for reinforcements in the case of no deal being made for Brexit when Britain officially leave the European Union on March 29, 2019.

There are concerns that a large increase in the number of British police officers on Northern Ireland streets could run the risk of inciting further violence among republicans. It could also work to complicate efforts to restore the power-sharing government in Stormont which crashed in 2017.

The extra police, however, are thought necessary to cover the possibility of violence over the border in the event of no deal. Police officers from England and Scotland are already normally drafted in during the Loyalist marching season in July when violence was once rife.

According to The Guardian, these police officers will be pulled from normal duty in England and Scotland and the call was made after another day of Brexit preparations increased the possibility that no deal will be made on Brexit before Britain’s departure.

The Democratic Unionist Party (DUP) who are currently propping up Theresa May’s Tory government still remain adamant that they will not concede to an Irish backstop on the border between Northern Ireland and the Republic.

The backstop would see the UK remain in the EU customs union if no wider trade deal was decided on before the exit deadline.

“The Withdrawal Agreement, as currently proposed, flies in the face of the Government's commitments on Northern Ireland as we leave the EU,” said DUP deputy leader Nigel Dodds after a meeting with Prime Minister Theresa May.

Irish leader Taoiseach Leo Varadkar has stated that he will not accept any deal that would make the backstop inoperable, however.