“His generosity and unwavering support for Rockland GAA, Monaghan GAA and countless community efforts will not be forgotten.” 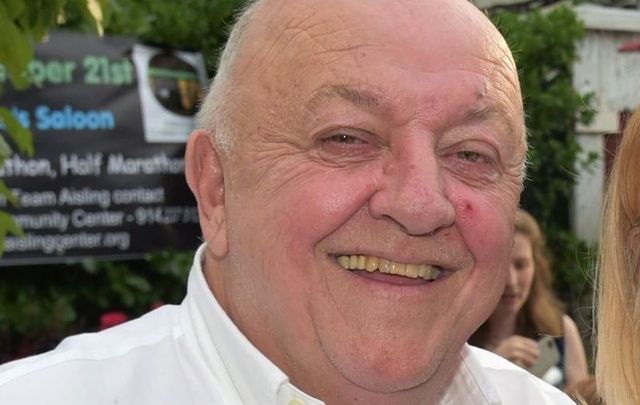 New York’s Irish community was shocked and saddened to hear of the untimely death of Philip Traynor, a native of Co. Monaghan and current resident of Rockland County was just 62 years old when he suddenly passed on July 10.

The devastating death was like the proverbial thunderbolt as Phil appeared to be on the crest of the wave. His business was flourishing, his family was thriving, he was an avid walker and he had just achieved his lifelong ambition when his company All-Boro Flooring had become the main sponsor of the Monaghan team in Ireland.

His children Courtney, Ryan, Grainne, and Ciara lost a great father, mentor, and role model while we in the larger community lost a great supporter and donor not just to the GAA on both sides of the Atlantic, but also to a host of charitable, civic and cultural events. Indeed you’d be hard put to find a dance journal, a race shirt, or a fundraiser that didn’t have Phil and All-Boro listed as a primary sponsor.

Phil was born in Carrickmacross in the late fifties. He attended the local St. Joseph’s primary school and his post-primary education at St. Michael’s Secondary School. Here he obtained the foundational technical and business skills which would later serve him well when he established All-Boro in New York.

The company would flourish, principally due to hard work, Phil’s acute business acumen, and infectious personality.  It became one of the biggest residential and commercial hardwood flooring companies in New York.

Phil’s footballing career began with the local Carrick-Emmett’s club, and it was here that his great love and passion for the GAA were fostered. By the time he arrived in New York in 1984 to his brother Patrick, Phil was a well-traveled road warrior as he had been driving rigs all over Europe for a number of years.

Once in the Big Apple, he fully immersed himself in the Irish scene on multiple levels.  He always had an eye for an opening or opportunity, and that certainly was the case with emerging trends in flooring.

Carpets, once a badge of comfort and prosperity, were now losing their appeal due to a confluence of economic factors and health concerns.  Instead flooring such as hardwood and vinyl were being viewed as more enduring, healthier, and appealing.

Phil eagerly embraced the opportunity, and All-Boro Flooring was born. You could also say he never looked back or perhaps even looked up as he was busy laying and maintaining floors across the tri-state area.

Longford was the first team that was the beneficiary of Phil’s sponsorship, but he would go on to sponsor an array of teams such as Monaghan (New York), Rockland, Kerry/Donegal as well as New York Ladies and Feile teams.

Phil always had a very visible and vocal presence on the sideline when his team was playing.  He enthusiastically exhorted his players, adamantly admonished opponents for their transgressions, and the referee wasn’t short-changed either as he was usually the recipient of some helpful hints such as a visit to Specsavers, the eye doctors or even giving up refereeing for good.

Then when the game was over, there was that trademark trip to the middle of the field, and the rugged handshake. Still, Phil would have the last word, and yes, the craic was always lively. 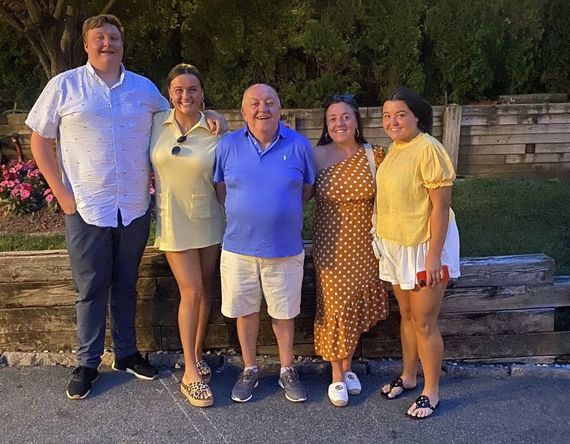 Phil Traynor with his four children.

When Phil moved to Rockland in the ‘90s he immediately got involved with the purchase and development of the Rockland GAA’s Center of Excellence.  In conjunction with a great crew of business people and contractors, he would steer the project to become one of the biggest centers outside of Ireland.

Phil as co-chair, along with his relentless advocacy with the powers in Croke Park, ensured that the project never languished.  It was a great badge of honor for him and his like-minded team when the center was officially opened in 2018.

The culmination of Phil’s love and loyalty for his Monaghan team came just a few weeks before his death when along with his son Ryan, he attended the Monaghan vs. Fermanagh game where All-Boro Flooring became the official sponsor of the team. Dick Clerkin, a fellow Monaghan man and journalist with the Irish Independent, said, “Philip’s sudden passing marked a sad end to someone who has been one of Monaghan’s greatest supporters over the last two decades. It is no exaggeration to say that without the financial backing of Philip and many of his New York GAA peers such as the McKennas, Tony, and Conor, the county’s sustained success over the last two decades would not have been possible. His presence on the Monaghan GAA landscape and in New York will be sadly missed.”

To say that Phil was just a great GAA man would be a gross understatement. Once he got himself set up he began to show his true benevolent character.

He joined the Co. Monaghan Association and became president in 1996. Frequently he came to the aid of new arrivals with accommodation, work, and immigration issues.

Over the years he has been honored by many organizations for his charitable works. For more than 20 years, part of his regular routine on Monday was making sandwiches at the Aisling Center and then delivering them to the homeless in the city.

Indeed Phil has been a major donor and supporter of the Aisling Center since it was established in 1996. When Team Aisling, a runners’ club, was established a few years ago, Phil was quickly on board as a major sponsor; indeed he even embraced road walking/racing as a healthy pursuit and managed to get a few 5ks under his belt. Today the club has over 800 members.

Once again when the fundraising campaign was launched to renovate the Aisling Center, Phil was on hand with a major contribution. He didn’t stop there but agreed to voluntarily install all floors, lock, stock, and barrel, gratis.

Phil’s generosity was legendary, and that sentiment was summarized by the Irish Consulate in New York which noted, “His generosity and unwavering support for Rockland GAA, Monaghan GAA and countless community efforts will not be forgotten.”

Though it is heartbreaking for the family and very sad for the wider community to lose such an influential figure, it was gratifying to see so many people show up at the Wyman Fisher Home last week to pay their respects. The line of mourners extended several blocks which required that visiting hours be extended to accommodate such an unprecedented crowd.

His son Ryan gave a very authentic eulogy that encapsulated the main features of his father’s life. The church was filled to capacity with many participating in the burial services from outside. Guards of honor were provided by the Rockland GAA, Monaghan GFC, and Kerry/Donegal ladies team.

Phil was laid to rest in St. Anthony’s Cemetery. May the great Monaghan and Rockland Gael rest in peace.