An Irish man was gifted a holy medal to bring to Ireland from New York, little did he expect the history of the medal to repeat itself. 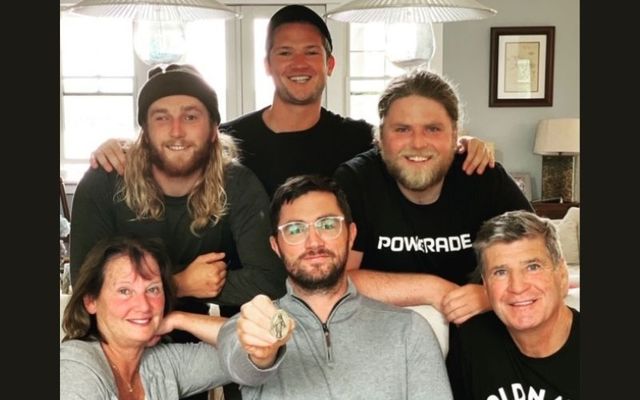 The Hard Way Home crew with Tom Hardiman and his family. Réamonn Byrne

Réamonn Byrne made a promise to a family that he would bring their Miraculous Medal with him on his voyage to Ireland. Stranded on Cape Cod, he found the history of the medal repeating itself.

During their first eight days out at sea, they were hit by seasickness, tropical storms, and an electricity failure. They were rescued off the coast of Cape Cod, MA, and after receiving help from locals they are now back out at sea continuing their journey.

Last year Réamonn Byrne, Irish man and crewmate of The Hard Way Home, was in his restaurant in New York when Tom and Micki Hardiman walked through the doors. Réamonn had met them previously when they attended a party at the restaurant and loved it so much that they declared it to be their spot whenever they were in New York.

Catching up with them a few months after they first met, Réamonn filled them in on his plan to row from New York to Ireland, "they were enthralled and horrified" says Réamonn laughing.

After Micki wrote him a check for his soon-to-be adventure, Tom turned to him and said "I have something you can do for me" and handed him a holy medal.

The story of Tom's Miraculous Medal goes like this, during the Korean War a man named George Gilmartin was stationed in Germany and while on leave he went to Ireland to search for distant relatives.

Along the way, he lost his belongings and became stranded, but eventually, a poor family in Ireland would come to his aid with a bed, food and scraped together money for him to get back to Germany. He never forgot this kindness and would tell the story dozens of times during his life.

For many years George carried a holy medal for luck and before he passed away he gave it to his son-in-law Tom Hardiman.

Sitting in this restaurant in New York Tom thought of George and their family's roots and asked Réamonn would he take the medal with him on his journey to Ireland, "of course" he says.

It's nearly a year later and the Irish man and his crew are just over a week at sea off the coast of America when the aftermath of a storm leaves them with no choice but to seek help. The Hard Way Home and their small rowboat are towed into a town called Falmouth on Cape Cod, a place Réamonn has never heard of.

Dejected and tired with no idea what they will do next, Réamonn receives a call from Tom who has been tracking their progress online, "I live right here" he says, "I'm coming down to help."

For the next few weeks, while they wait for their boat to be repaired, Tom and Micki give the crew shelter, food and drink.  An act of kindness not to be forgotten. The history of the holy medal repeating itself.

It could all be luck or a thing of chance, yet when people ask Réamonn if he's a religious man he replies, ‘I’m not but I’m getting there fast.’