Irish Americans and local politicians welcomed Monday's news that a proposal to place a new memorial adjacent to the Irish Hunger Memorial will be reconsidered. 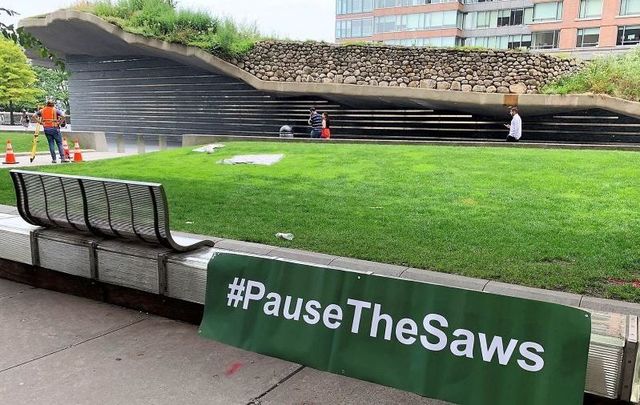 Those who were in opposition to Governor Cuomo’s proposal to place his Circle of Heroes memorial to essential workers adjacent to the Irish Hunger Memorial were able to breathe a sigh of relief on Monday when the Battery Park City Authority (BPCA) officially u-turned.

George Tsunis, the chairman of the BPCA, said in a statement on Monday that “a new and expanded advisory committee” was being assembled and that the project would not be completed by Labor Day, September 6, as initially pitched by Cuomo.

The BPCA noted that "no work will begin on the Essential Workers Monument until the committee completes its work" and that "the location within BPC has not been finalized."

The Irish and Irish American community was among those lending their voices in opposition to the proposal to place the new memorial adjacent to the Irish Hunger Memorial, which was confirmed during a lengthy public meeting amongst Manhattan Community Board 1, the BPCA, and plenty of concerned residents last Wednesday.

Adrian Flannelly, the Irish Cultural Liasion for the Irish Hunger Memorial, last week expressed his disappointment that he had not been included in initial proceedings. He made the topic a focus of his July 10 episode of Irish Radio Network.

The Ancient Order of Hibernians (AOH) said that Cuomo's proposal to build another memorial around the perimeter of the Irish Hunger Memorial was "disrespectful."

Members of the NYC Council's Irish Caucus, including Daniel Dromm, Robert Holden, and Justin Brannan, also said they were opposed to the proposal.

On Monday, the Battery Park City Neighborhood Association (BPCNA), who was fiercely opposed to the proposal for a number of reasons including and beyond the potential impact on the Irish Hunger Memorial, expressed their "gratitude" for Tsunis and the BPCA committing to a new advisory committee:

We express our gratitude for formally pausing construction of the Essential Workers Monument and establishing a new and inclusive advisory committee to select a site and design. Our Rally is still on, so come and hear from leaders and share your thoughts! #PausetheSaws

Thank you @NYGovCuomo and Chair Tsunis of the @bpca_ny for hearing us. We look forward to hearing more about the Advisory Committee. Optimism abounds! https://t.co/c0xNSphB9a

The news came just hours before a ‘Pause the Saws’ rally was scheduled to kick off at the Irish Hunger Memorial on Monday afternoon which promised appearances from Congressman Jerry Nadler and other local politicians.

Nadler, who still attended the rally which shifted from protest to celebration, said on Twitter on Monday:

This victory belongs to @BPCNA_official and @CommunityBoard1. Community members put their bodies in front of bulldozers and won. Now our essential workers will get the monument that they truly deserve!

Nadler further said in a statement: "Today's decision is a clear and decisive victory for Battery Park residents who literally laid their bodies on the line to stand up for their neighborhood.

"I'm grateful to the Governor and to the BPCA for their willingness to listen to local residents. While we all share in the desire to honor essential workers, it is vital that the process to do so includes public input so that these heroes receive the monument they deserve. I’m proud the Battery Park City community was able to come together to preserve much-loved open spaces. This triumph is theirs."

Daniel Dromm, the chair of the NYC Council's Irish Caucus, reacted to Monday's news, saying: “While I am gratified to learn of the delay in construction of an Essential Workers Memorial, the new site should be in a community, like mine, where many of the essential workers live and work.

The Governor & George Tsunis at @BPCA_NY have made the right call: Stepping back from the rush toward an essential worker monument, with a new committee of representatives of the workers, local stakeholders, and others to create "a welcome and world-class monument" at a spot TBD.

Assemblymember Robert Carroll said it was "great news" and that having the new memorial adjacent to the Irish Hunger Memorial would have been "inappropriate."