Victory - for now - for those who opposed the proposal to place the essential workers Circle of Heroes memorial adjacent to the Irish Hunger Memorial. 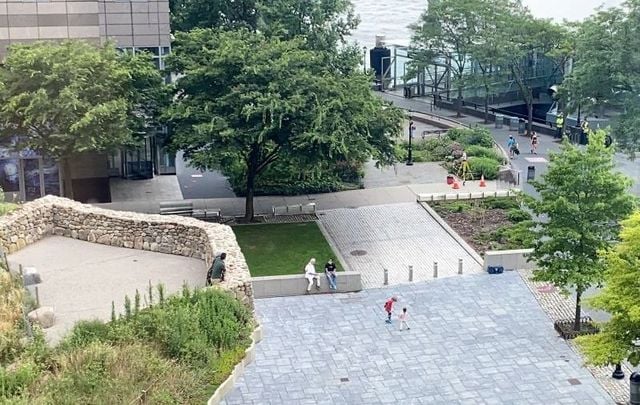 Surveyors were pictured near the Irish Hunger Memorial in Battery Park City on July 10, 2021. Fergal Walsh

The Battery Park City Authority has confirmed that it will put together a "new and expanded advisory committee" and that the proposed essential workers memorial will not be unveiled by Labor Day as originally planned.

George Tsunis, the Chairman of the Battery Park City Authority (BPCA), said in a statement on Monday afternoon: “Over the past two weeks, we have heard two things clearly and consistently: the love that our community harbors for its parks and public spaces, and its desire to honor the enduring efforts of essential workers over the course of the COVID-19 pandemic.

"Through this active and unprecedented feedback loop, we have also heard the community’s concerns about the proposed Essential Workers Monument, listened to those concerns, and incorporated that feedback into the decision-making process with the Governor’s Office, essential workers, and other stakeholders.

"To continue incorporating public feedback into the process, we will put together a new and expanded advisory committee comprised of local stakeholders, essential worker representatives, and others to review options within Battery Park City to select a site and design for a welcome and world-class monument our essential workers so richly deserve.

"While this will move opening of the Essential Workers Monument beyond Labor Day, which we felt was a significant date as essential workers are largely union members, there will be an essential worker recognition on Labor Day nonetheless. We want grieving families of lost essential workers to know that Battery Park City respects their sacrifice and contribution but BPCA residents feel strongly and potential litigation by residents would further extend the process.”

The BPCA added: “No work will begin on the Essential Workers Monument until the committee completes it work; will not be completed by this Labor Day.

“The location within BPC has not been finalized.”

Following intense pushback, the Circle of Heroes was moved out of Rockefeller Park and two alternative sites were proposed - adjacent to the Irish Hunger Memorial and the Esplanada Plaza. 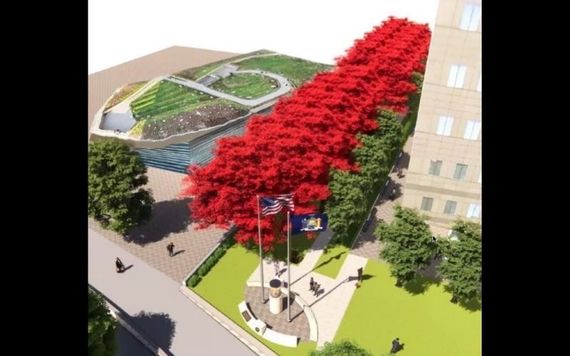 A rendering of the proposed memorial adjacent to the Irish Hunger Memorial in NYC.

Neither option won the immediate approval of local residents, who argued that they were not consulted in the project, that the project was being rushed, that the design of the memorial was not fitting, that the environmental impact was not considered, among other grievances.

A rally was scheduled to take place this afternoon at the Irish Hunger Memorial where community members and local politicians were expected to voice their opposition to the project. It is understood that the rally will now be refocused as a type of "victory rally," according to one source.