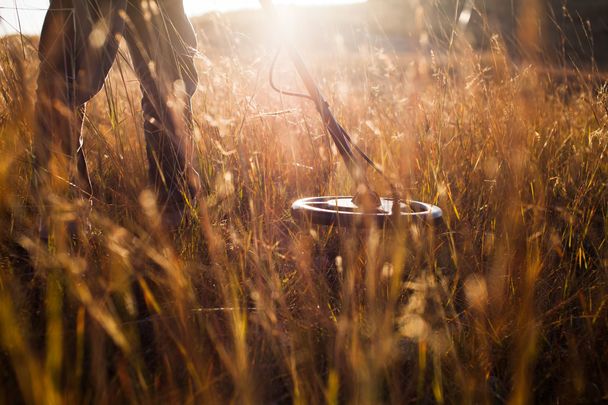 Treasure found! On his first outing with his new metal detector a 10-year-old found an ancient English sword! Getty

Using his birthday present for the first time, Fionntan Hughes, was "quite excited" having unearthed real-life treasure.

A ten-year-old Northern Irish boy discovered real treasure using the metal detector he had received as a birthday present.

Fionntan Hughes unearthed a rusty sword while trying out his metal detector. Little did he know that his found treasure was an antique dating back to between 1700 and 1799.

Young Hughes was "quite excited" by the discovery he made while fishing on the banks of the River Blackwater near his home, he told the BBC.

According to the Smithsonian, Fionntan, his father and his cousin discovered the sword while using the detector for the first time.

Read more: Irish treasures that were discovered by chance

Fionntan's father, Paul, reached out to Dr. Greer Ramsey, the curator of archaeology at the National Museum of Northern Ireland. They are currently figuring out what type of sword it is, and how old it is.

However, some antiquities experts who have seen photos of it believe the sword to be about 300-years-old, dating back to the 18th century.

"What a fine thing to find," Philip Spooner, an antique dealer with more than 30 years experience told BBC's Newsround.

Antique experts, Mark and David Hawkins, who have more than 55 years of experience between them, said that while it was hard to be sure due to the rust, "We think it is likely an English basket-hilted broadsword, with flattened bars and large, plum pudding pommel - typical of the early types."

May his benevolent reign last a thousand years.

"A 10-year-old metal detectorist has found an ancient sword with a metal detector" https://t.co/ZigGH1JVmB pic.twitter.com/aQQDBYtH1t

Fionntan was especially lucky given this was his first time using his metal detector however back in 2019 a metal detectorist in County Antrim trying to help find his friend's wedding ring discovered a stash of 84 gold coins worth $128,552. The coins are believed to date back as far as King Henry VII's reign, in the early 1500s.

Read more: Some Irish treasure discoveries that you didn’t know about

In the United Kingdom between 1997 and 2016, amateur history fans unearthed about 1 million archaeological discoveries. Similar to the Republic of Ireland's law, the UK’s Treasure Act of 1996 requires those who discover buried treasure to report their finds to the local coroner’s office, who will then notify local authorities.

Fionntan and his father immediately contacted the authorities when they realized what they'd found. Paul, the proud treasure hunter's father said "The last thing I want is for it to be left rusting away in my garage."

He added that it's “deteriorating by the day.”

The Hughes hope that it will be handed over to the National Museum of Northern Ireland and eventually be put on display.