"Irish Pickers" follows Irish vintage expert Ian Dowling and his team from Rare Irish Stuff as they travel the island of Ireland looking for forgotten treasures. 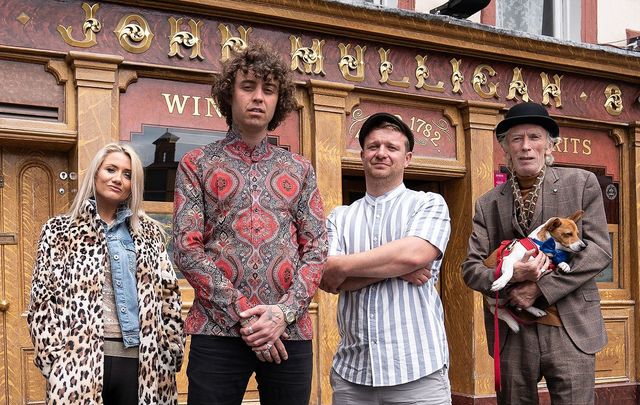 "Irish Pickers" follows Irish vintage expert Ian Dowling and his team from Rare Irish Stuff as they travel the island of Ireland looking for forgotten treasures.

From historic memorabilia and celebrity artifacts to rare coins and important letters, there's an abundance of treasures to be discovered on the island of Ireland.

Nobody knows this better than Ian Dowling, Irish antiques expert and the man behind Rare Irish Stuff, the largest purveyor of vintage Irish memorabilia online and through their Dublin storefront.

Dowling and his team - Mark "Butzy" Butterly, "Vintage" Vinny Smith and Ali Foy - are the stars of "Irish Pickers," a new series adapted from History channel's long-running series in the US, "American Pickers."

Read More: Vintage Irish whiskey vending machine is the thing that's been missing from your nightlife

Narrated by "Father Ted's" Ardal O'Hanlon, "Irish Pickers" follows Dowling and his team around Ireland as they seek out exciting rare finds and close on sales to eager customers. Produced by A+E Networks UK, the show is currently airing on Sky Channel 164 and Blaze.TV in Ireland and the UK and will potentially be coming to the History channel in the US later this year.

It sounds like a wild ride! Recent episodes have included Boston-born celebrity tattooer Mark Mahoney, who purchased an antique IRA medal that will go on display on the wall of his Shamrock Social Club in Hollywood, and a bar that Oliver Reed once drank at.

IrishCentral caught up with Dowling to get a glimpse into the life of a real Irish treasure hunter.

How did you get into the Irish antiques business?

I developed an ability to buy and sell as a kid. In my teens, I became fascinated with old unusual items. After a stint traveling in Australia, I arrived back to Ireland in the recession of 2009. The Irish economy was in a nosedive, I had no job, no income and things were looking grim. One Friday night in my friend's local pub I played the local GAA football club lottery which had rolled over for a year at the point with no winners. I picked 4 numbers on a €2 ticket and won the jackpot of €13,500. I used that money to start RareIrishStuff.com. I can't explain it, but I really believe that money was a gift from above.

Read More: Vintage footage shows how Ireland ushered in springtime in the 1950s

What are some of your all-time favorite finds?

I have so many. I guess the whiskey vending machines were one of my favorites, I found 160 of them in a barn in Kilkenny. An official treaty negotiation dinner menu signed by Michael Collins, Arthur Griffith and the entire Irish delegation involved in the 1921 negotiations that led to the Irish Free State was another of my favorites. I also had a Good Friday agreement signed by all the parties involved in the negotiations in 1998 which brought about peace on the island of Ireland.

A small bar Oliver Reed drank at was one of my favorites on the show. That went to a client in Wisconsin. An IRA medal from the War of Independence owned by a fascinating volunteer named Pat Healy was another great pick with a brilliant story attached. That went to Irish-American celebrity tattooist Mark Mahoney who is based in Los Angeles. He is the proprietor of the Shamrock Social Club on the Sunset Strip, which is basically a little patch of Ireland in Los Angeles. I am proud that Pat Healy's story will be remembered and celebrated there. We also found a British Captain's military trunk that we traced back to Prince Charles' gardener, which was in the Tipperary episode. Apart from being a purveyor of rare Irish items, I pride myself on connecting people with items they will hopefully treasure for years to come. That's why I love this job. That and the profit.

How did the show come to be?

I pitched the idea to Rob Carey, the man who launched American Pickers in the US. Rob quickly realized the Emerald Isle was an ideal picking location thanks to its treasure, quirky personalities, rich history & scenery.

Any advice for those seeking Irish antiques/treasures?

Try to find items that are unique. You can command a better resale value on items that cannot be found easily elsewhere.

How has life and work changed for you in light of Covid-19?

I sell everything online via my website RareIrishStuff.com. Since the Covid crisis, the packing company I work with closed as it's a nonessential service. So I have paused shipments until things blow over. It has been a nice break but I do have a severe itch to get back picking for rare Irish items. I look forward to that day. In the meantime, you can watch past escapades on the show Irish Pickers!