Northern Ireland will “join the Republic of Ireland” in 2023, former Russian president predicts

Northern Ireland 'joining the Republic of Ireland' was among ten of Dmitry Medvedev's bold predictions for 2023. 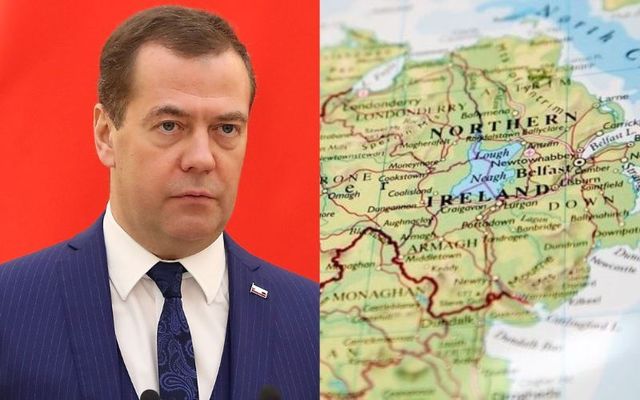 “Northern Ireland will separate from the UK and join the Republic of Ireland,” Dmitry Medvedev, the deputy chairman of the Security Council of Russia and the former President of Russia, said in a Twitter thread on December 25.

Northern Ireland 'joining'  the Republic of Ireland was one of ten bold predictions tweeted by Medvedev, who is close with current President of Russia Vladmir Putin.

6. War will break out between France and the Fourth Reich. Europe will be divided, Poland repartitioned in the process

7. Northern Ireland will separate from the UK and join the Republic of Ireland

In order for Northern Ireland to "join the Republic of Ireland," the Good Friday Agreement dictates that the Secretary of State for Northern Ireland can call for a referendum in the region “if at any time it appears likely to him that a majority of those voting would express a wish that Northern Ireland should cease to be part of the United Kingdom and form part of a united Ireland.”

The Republic of Ireland would also have to pass such a referendum.

At the start of his Twitter thread which has been viewed millions of times, Medvedev said: “On the New Year’s Eve, everybody’s into making predictions

“Many come up with futuristic hypotheses, as if competing to single out the wildest, and even the most absurd ones.

Medvedev went on to predict that “The UK will rejoin the EU” and that “The EU will collapse after the UK’s return; Euro will drop out of use as the former EU currency.”

He further predicted that “The Fourth Reich will be created encompassing the territory of Germany and its satellites, i.e., Poland, the Baltic states, Czechia, Slovakia, the Kiev Republic, and other outcasts.”

He continued: “Civil war will break out in the US, California. and Texas becoming independent states as a result. Texas and Mexico will form an allied state. Elon Musk’ll win the presidential election in a number of states which, after the new Civil War’s end, will have been given to the GOP.”'

Medvedev concluded his Twitter thread by saying: "Season greetings to you all, Anglo-Saxon friends, and their happily oinking piglets!"

In 2010, Medvedev, then President of Russia, met with U2 frontman Bono when the Irish band was in Moscow for their first-ever concert in Russia.

Medvedev told Bono: “You are doing important things, because taking care of people is not only a job for politicians."

He added: "The charity work that you and your colleagues do has brought you respect all over the world."

That same year, Medvedev awarded Russia’s highest honors to spies who were discovered living and working under false Irish identities in the US.