Claire Byrne tells Nigel Farage "you haven't got a clue" when it comes to the history of peace on the island of Ireland. 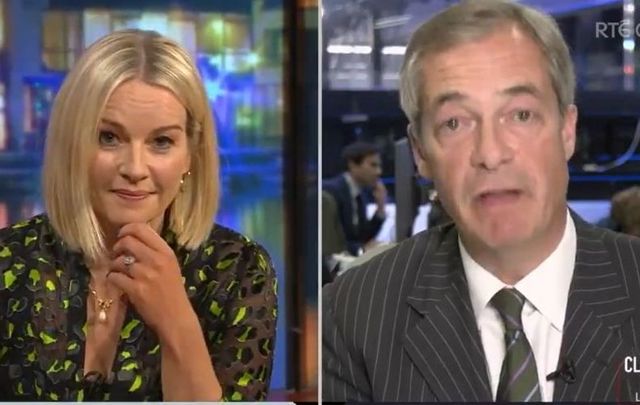 Claire Byrne had Brexiteer Nigel Farage on her RTÉ One show Claire Byrne Live on October 18 to discuss Brexit, the Northern Ireland Protocol, and Ireland within the EU.

Towards the end of the discussion, Byrne brings up how Farage recently filmed a video in which he says "Up the 'Ra" and uses it to question his knowledge of Ireland.

Byrne says: “I know that you apologized for the birthday greeting that you delivered in the last couple of days, but I want people to see just how much you know about the history and culture on this island.”

The show then cuts to the recent Cameo video that Farage was paid $100 to record in which he says ‘Up the ‘Ra!,’ a slogan of support for the Irish Republican Army (IRA). Farage afterward claimed he did not know the implication of the slogan.

The show then returns to a slightly stunned-looking Farage.

“Up the ‘Ra, Nigel?” Byrne says as Farage looks tongue-tied. “I mean, I know that you said sorry. I know that you get 87 quid [for the recording], it’s entirely within your rights to do that.

“But come on. Don’t try and lecture the Irish people about the culture and history and precarious nature of peace on this island,” Byrne says, talking over Farage. “You haven’t got a clue.”

You can watch a clip of the exchange between Farage and Byrne that played out on Claire Byrne Live on October 18 here:

In the full interview, Farage then attempts to steer the conversation back to whether or not Ireland wants to be "an independent, democratic nation or governed by foreign bureaucrats" before Byrne circles back to the 'Up the 'Ra' video.

Byrne said: "Nigel, you haven't thought about the people who died on the streets of Northern Ireland and beyond. If you can say something like that and not know what it meant, you haven't given a minute's thought to what happened on this island."

"How dare you even suggest that," Farage says, to which Byrne replies, "You said it, not me." Farage said he has "close family links" to Ireland and that he wants to see the country succeed.