Irish professional rugby player Nick McCarthy, 27, is being praised as a "role model" after publicly opening up about his sexuality. 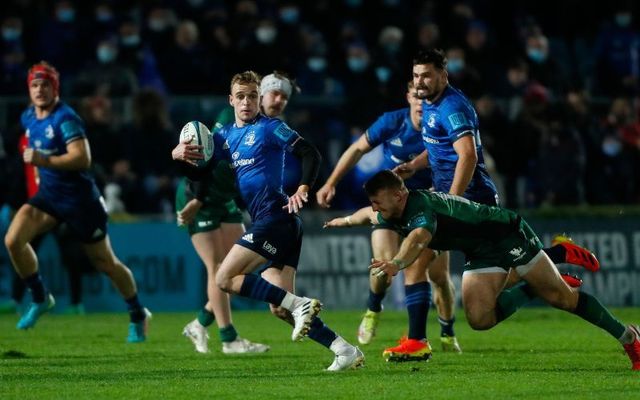 December 3, 2021: Nick McCarthy of Leinster is challenged by Peter Robb of Connacht during the United Rugby Championship match between Leinster and Connacht at RDS Arena in Dublin. Getty Images

Nick McCarthy, a professional rugby player with Leinster, has come out as gay, admitting that he previously considered walking away from the sport due to his sexuality.

McCarthy, 27, who plays as a scrum-half for the Irish province, said he contemplated retiring before making the decision because he didn't think he could come out while playing professional rugby.

"I came out to my teammates in January and I was obviously pretty nervous about doing so," McCarthy said in an interview on the Leinster Rugby website.

"But I'm really happy that I did it. I struggled with coming out for a while and it was starting to impact on me and my happiness so it was the right decision.

"It affected me so much that I agonized over my future and contemplated walking away from rugby altogether because I just didn’t think I could come out while playing rugby."

McCarthy said he talked with Leinster coaches Leo Cullen and Stuart Lancaster in November, stating that both coaches offered him "unbelievable" support that helped him come out to his teammates.

"They helped and guided me over the months that followed so that I felt more comfortable to come out to the group.

"I only made a quick announcement (to his teammates). But I just remember the room erupting! They were all delighted for me and it was immediately a weight off my shoulders."

💙 | Scrum-half Nick McCarthy has spoken publicly for the first time about his sexuality.

He now hopes that sharing his experience will be encouraging and provide hope to others. 👏

McCarthy described himself as a private person and said he wrestled with the idea of coming out publicly, stating that it was "not common" in professional rugby.

However, he said he was inspired by the examples of other professional sportsmen, including fellow Leinster player Jack Dunne, who came out as bisexual last year.

"Looking at Carl Nassib (American Football player) or Josh Cavallo (Australian soccer player) coming out and Jack Dunne here in Leinster and how he spoke publicly last year about his bisexuality, has helped me a lot. I’ve had good conversations with each of them and they’ve been hugely encouraging."

McCarthy said his experience of coming out has been positive and said he hopes to provide hope and encouragement to others in a similar situation.

"I'd love people to see, from my experience, that coming out has been really positive," McCarthy said.

"I feel if I can now help others come out in professional sport or in their everyday lives and make being gay more normal and not a thing to be worried about, then that is a positive. I’m so much happier than I was a few months ago and I’m optimistic for the future."

Leinster Rugby head coach Leo Cullen and club captain Johnny Sexton both described McCarthy as a role model after his decision to come out.

“Nick has definitely had a battle going on in the back of his mind, and I’m sure there are other young people going through something similar," Cullen said.

“He will be an amazing role model to people because he’s a great person in the group. He’s very popular in the squad.

“We just want what’s best for Nick but he’s going to be an amazing role model, we hope, to lots of young people out there.”

Sexton added: “By speaking openly about his sexuality, Nick will be a role model for others and we couldn’t be prouder of him.”

Tánaiste Leo Varadkar also praised McCarthy on Twitter, describing his decision to come out as "an important moment for men's sport".

"Nick will be role a model for young men around Ireland who feel they have to suppress who they are," Varadkar said.

This is an important moment for men's sport.

Nick will be role a model for young men around Ireland who feel they have to suppress who they are. 🏳️‍🌈💙🇮🇪 https://t.co/bZwXwMWc1s